Before we get started with these haunting facts, it’s important to know marine animals will generally leave humans alone unless they are provoked and feel a need to defend themselves (which is why it’s so important to never touch animals in the ocean). Remember — we’re not a food source for anything that lives in the ocean! 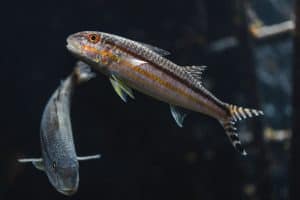 The bandtail goatfish appears docile and unassuming but can cause quite a fright if their brains or guts are consumed. The brain of this fish is toxic and, if eaten, can cause disturbed sleep and hallucinations. In old Hawaiʻi, making an offering to Pahulu, King of Ghosts, could help prevent ill effects from consuming the fish, known then as weke Pahulu. Today, this fish is known by locals as the nightmare weke. 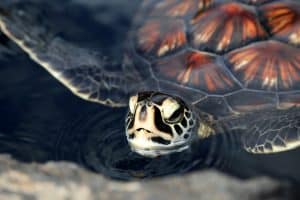 Sea turtles are a fan favorite for a reason. They’re adorable, curious, relaxed creatures…on the outside, at least. Peer inside their mouths, however, and you’ll find countless spiny projections that line sea turtles’ throats all the way from their mouths to the opening of their stomachs. These admittedly creepy-looking spines are called papillae and are made out of keratin — the same protein found in our hair and nails. However terrifying, they do serve a purpose. The papillae are designed to trap food while allowing water to pass through and allow sea turtles to consume jellyfish without being harmed by their stinging venom. 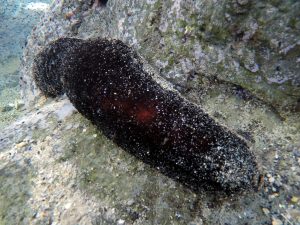 These common tide pool echinoderms have a unique (and slightly weird) talent! When sea cucumbers feel threatened, they can shoot their guts out of their bodies to defend against predators — also known as evisceration. Once they’ve successfully escaped the throes of danger, the creature will be able to begin the process of regenerating their lost organs. 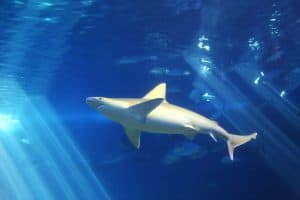 We’re all able to conjure an image of a shark’s jaw. Powerful, sharp teeth — and lots of them. Did you know, though, that sharks don’t rely on just two sets of teeth like humans do? Sharks lose and regenerate their teeth constantly throughout their lives, much like a conveyer belt! Some sharks can go through 50,000 teeth in a lifetime. Despite their seemingly endless stream of teeth, sharks can’t chew. We have side-to-side movement in our jaws as humans, but sharks can only open and close their mouths. This forces them to slice their food into smaller chunks by vigorously shaking their heads back and forth.

This deep-sea shark’s ghastly appearance may haunt your nightmares (don’t fret too much though, they dwell at depths of up to 1200 meters and are rarely seen). The goblin shark has been found in all three major oceans and patrols the deep dark sea with its narrow snout and fanglike teeth. This shark has developed a unique method for gulping its prey — it can thrust its jaw three inches out of its mouth to sneak up on meals that are just out of reach. How is this possible? Goblin sharks’ jaws are connected to three-inch-long skin flaps that unfold from their snout. Talk about a freaky feeding method! 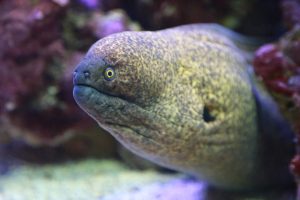 Moray eels have a second set of movable jaws hidden in their throats, known as pharyngeal jaws. When prey is near, these jaws launch forward, capturing a snack with their curved, backward-pointing teeth, making it nearly impossible for their snack to escape. During this process, moray eels will whip and wrap their bodies around, further entrapping whatever meal they’ve snatched. 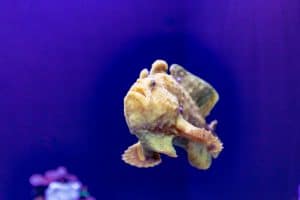 Frogfish are relatives to the anglerfish that reside in the ocean’s depths and lure in their prey by flicking a lure-like rod over their mouths. The shocking part, though, is that they can engulf their prey with such precision and speed that even if you don’t blink, you might miss it. 50 times faster than the human blink, the rate at which they consume their food is faster than any other ocean vertebrate. From small fish and crustaceans to creatures as big as their bodies, frogfish can eat them all due to their massive mouths and lightning-quick reflexes.

The vampire squid is a large, carnivorous deep-sea squid. While they won’t come to suck your blood, their appearance resembles Dracula’s cape. The flesh connecting their tentacles forms a spooky flowing cape that the squid can rapidly pull up and over their heads, revealing a set of spines along each tentacle to keep predators away. 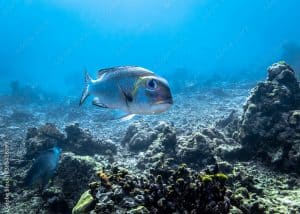 This humble-looking fish is hiding a dreadful secret inside its mouth. The bigeye emperor is known as mū in Hawaiian, the name for the public executioner in ancient Hawaiʻi who performed executions on taboo breakers. This fish may share the title of old Hawaiʻi executioners, but that’s not the frightening part. Peer inside their mouths, and you’ll find teeth that resemble human molars — perfect for crushing crabs and small mollusks and for sending chills down your spine. These human-like teeth reside in the back of bigeye emperor’s mouths, while their front teeth are sharp and pointy. 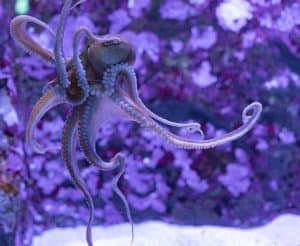 Octopuses are well-loved intelligent creatures with some creepy things going on inside of their fleshy bodies. For starters, these cephalopods have blue blood coursing through their bodies that enable them to survive in the deep ocean. Hemocyanin, a blood-borne protein containing copper atoms that bind to an equal number of oxygen atoms, is responsible for the blue hue of octopus blood. The blue-tinged hemocyanin binds to oxygen in the blood, transporting it through the octopus’s body to supply tissues, which is critical in their survival. On top of that, the famous ink they release when threatened isn’t just to hide so they can escape — it actually serves as their own unique type of pepper spray. Octopus ink contains tyrosinase, a compound that causes a potent irritation to the eyes of their predators, causing temporary blindness.