If you could go back to 1998, Maui would look a lot different than it does today: Lahaina is surrounded by sugar cane, Aloha Airlines flies overhead, and gas is only $1.64 per gallon. In the spring, Maui was about to get its first Aquarium. The new 3-acre Maui Ocean Center would open in Ma‘alaea, creating a new window into Hawaii’s underwater world. Over the next 19 years, Maui Ocean Center would witness waves of change in the surrounding marine habitats.

But you don’t need a time machine to see the difference, just speak to John Gorman, Maui Ocean Center’s Head Curator, who witnessed these changes firsthand.

John Gorman grew up in the farming and coal mining village of Glenboig, Scotland and would see the ocean only once a year during annual school field trips. This early exposure to the ocean would eventually lead Gorman to careers in the Caribbean, Mediterranean, Red Sea, and finally to Maui, where he would assist in opening Maui Ocean Center.

“When I first moved here, the corals around Maui were rather healthy and in good condition,” states Gorman, “but in all honesty, one has to admit that there has been some degradation and deterioration to Maui’s reefs over the years.” One of the notable changes occurred in 2015 when record-breaking ocean temperatures shocked corals throughout the Pacific. “It was a wakeup call for all of us” he adds, “we witnessed unprecedented effects to certain coral species.”

As Maui’s reefs have experienced the cyclical effects of coral bleaching, other marine animals faced their own adversity through the years. Hawaii’s humpback whales of the greater North Pacific humpback population declined in the 19th-20th century due to whaling. According to NOAA assessments, Hawaii’s sub-population of humpbacks fell to about 4,000 individuals in 1993, but rebounded after decades of protection through the international ban of humpback whaling, Endangered Species Act, and Marine Mammal Protection Act. Today, it’s estimated the Hawaii’s North Pacific humpbacks number over 10,000 whales. 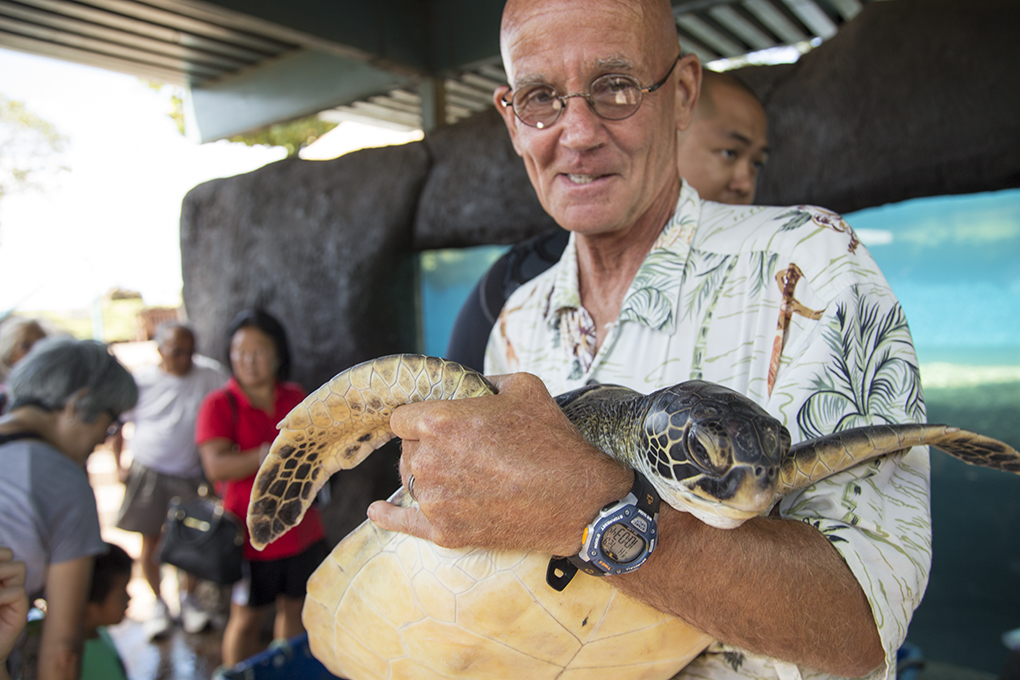 Hawaiian green sea turtles, a key component of Maui Ocean Center’s educational efforts, have faced a similar story. A genetically distinct sub-species from the green sea turtles found around the world, Hawaii’s honu were in decline in the 1970s due primarily to harvesting. After receiving state and federal protection, NOAA estimates the honu’s population steadily increased by 53% over the last 30 years, resulting in a positive upgrade in the species’ classification from endangered to threatened.

The question is then asked: how can we continue to support and improve these efforts?

Gorman is passionately optimistic and committed, “I believe for coral related issues, we’re on an uptick. We have pioneers across the state who are making strides in advanced coral propagation and mitigation methods including Dr. Ruth Gates at the Hawaii Institute of Marine Biology, the Division of Aquatic Resources’ new coral nursery facility, the Maui Coral Reef Recovery task force, MOC Marine Institute, and the support of volunteers throughout Hawaii.”

While Gorman acknowledges the recovering honu and humpback whale populations, he adds, “It’s easy to say ‘there seems to be more of them so it must be a success’, but we need to be cautious in proclaiming a 100% success story. It’s a scientific process to evaluate these things, and an increase in population doesn’t necessarily mean the animal has truly recovered. Population counts are just one of many variables in assessing the status of a species.”

On the eve of Maui Ocean Center’s 19th anniversary, Gorman and the Aquarium’s ‘ohana reflect on the journey, challenges, and progress being made throughout the islands since opening in 1998. While some species have embarked on the long road to recovery, others are facing new or intensified challenges brought upon by climate change and human impact. “Educational outreach remains a top priority for us,” adds Gorman, “from presentations to hosting school field trips and collaborating with the state on coral transplant projects, I believe Maui Ocean Center is making a positive impact on the local environment and community.”