How is it that an organism comprised of 95% water which also has no head, no heart and no brain turn out to be such a complex and interesting creature?   Consider the moon jellyfish (Aurelia aurita) with its large saucer shaped transparent bell. Thought to have been accidentally introduced to the Hawaiian Islands, it now thrives in the calmer waters of canals, bays and lagoons, even surviving in brackish waterways.  As a medusa, or in the most familiar mature stage, it sports tentacle lined scalloped edges with four oral arms hanging down, as it gently pulsates through the water.  The sight has been known to have a mesmerizing and calming effect to the onlooker as it appears to float in slow motion.  It would be inaccurate to say that it is “swimming” since it truly is at the mercy of the tides and currents.  The jelly contracts coronal muscles which allow it to rise closer to the surface where its food source of zooplankton is more plentiful.  Thankfully, this particular species of sea jelly doesn’t pack a harsh sting, at least for humans.  Though it does contain nematocysts (stinging cells), only those people with highly sensitive skin may experience the telltale red marks and stinging sensation as a result of direct contact which can occur more commonly in other classes of sea jellies in the phylum of cnidarians (try saying nai-dare-ee-ans).

Some of the more interesting complexities of this marine animal come to light when their eating habits and reproductive cycles are considered.  The moon jellyfish (since these animals are not fish, many scientists will refer to them by their class name of Scyphozoans) can capture food from nearly every surface of its body, using not only the tentacles and oral arms, but surface of its mucus covered bell that also contains pouches with which to hold their prey until supper time! Tiny cilia (microscopic, hair-like structures) sweep the planktonic food toward the oral arms where it will then be ingested by structures called the gastric pouches (very simple stomachs). 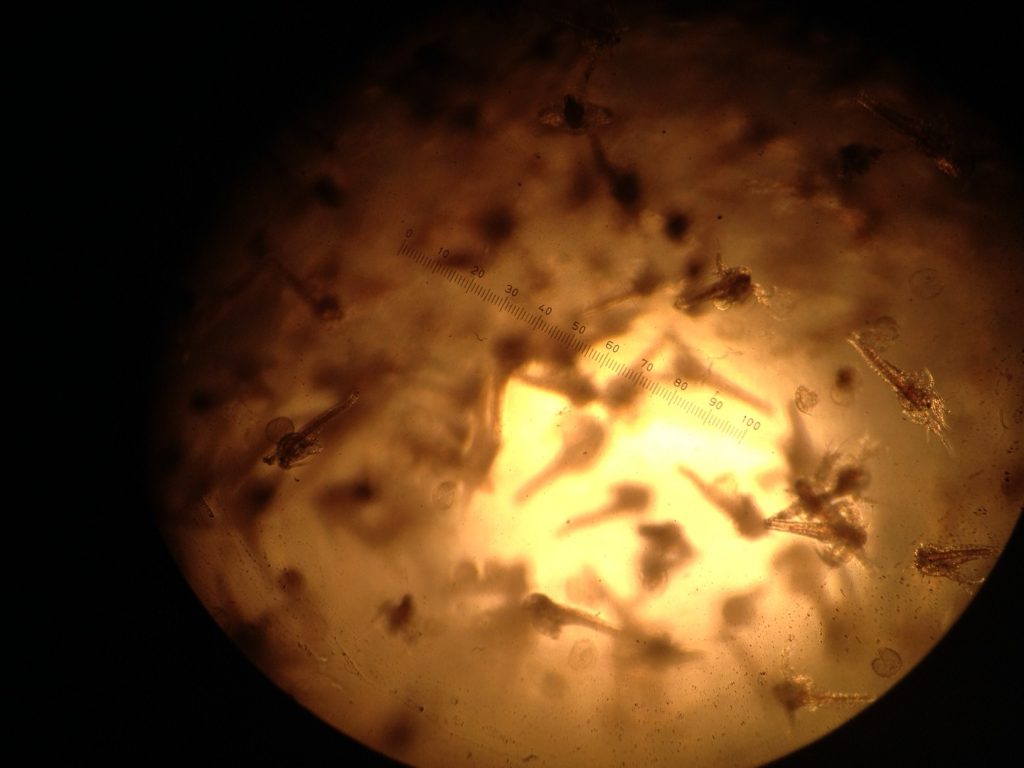 Nauplii (also known as brine shrimp or sea monkeys) under a microscope. Nauplii are raised and fed to the moon jellies on exhibit. 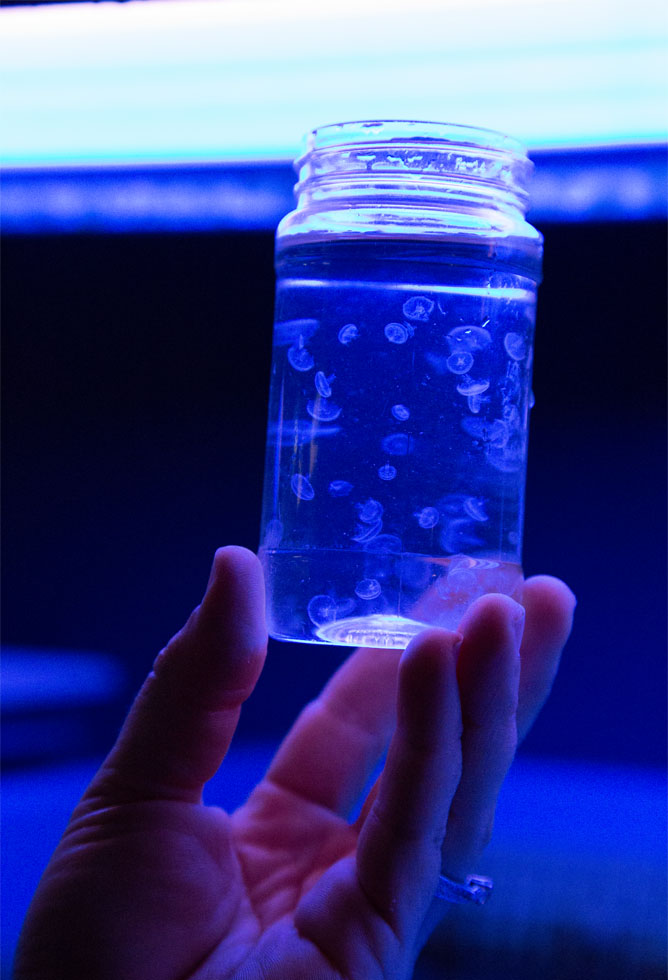 Juvenile moon jellies are raised in the Aquarium lab.

When it comes to reproduction, the Aurelia aurita ensures its survival by doubling the way in which it can multiply!  Male and female moon jellies reproduce through a more ‘traditional’ method of spawning where the male will release sperm into the water.  The sperm then mixes with the eggs held on the female’s oral arms.  She broods the resulting planulae (the larval form) for 7-11 days and then releases them. Here’s where the Aurelia aurita’s true complexity comes into play. The swimming planula larva floats through the water until it lands on a solid surface, anchoring itself in place.  The organism morphs into a polyp resembling a small anemone, and then develops into a strobilia.  As the strobilia matures, the uppermost section, known as an ephyra, launches off the top, exhibiting the more familiar pulsating contractions as it moves away from the stationary structure.  The ephyra will then mature into the final medusa stage, looking like the easily recognized moon jelly, and will live six to twelve months.

While there are around 200 species of scyphozoans in the world’s oceans, fifteen of these are known to inhabit Hawaiian waters.  Due to the types of conditions these jellies prefer, they are not often seen by divers or snorkelers.  However, should you find yourself lucky enough to see the Aurelia aurita, relax and enjoy. The mesmerizing effect is better than a lava lamp!