Hawai‘i is home to approximately 40 shark species ranging in various shapes and colors, but most feature grey backs and white bellies. The contrast between colors is called countershading, a trait that enables sharks to blend in with the ocean depths when viewed from above and the sun-lit sea surface when viewed from below. The concept of countershading may also illustrate how humans perceive sharks: some may see bloodthirsty beasts while others may see ancient marvels that mean us no harm. It all depends on the angle you choose to view them from. 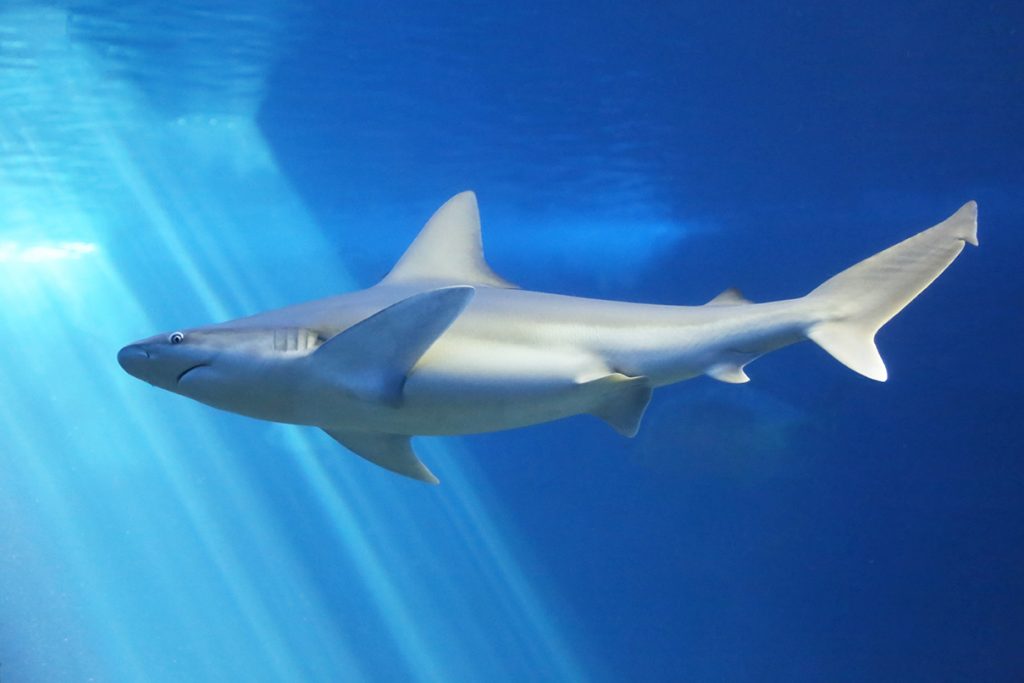 Our oceans have been home to sharks for more than 400 million years. As an apex predator, sharks have served as the caretakers of the sea by removing sick, injured, and deceased animals, therefore keeping the ocean clean and marine life populations healthy. While sharks are highly effective predators, they can equally be viewed as mere scavengers that would rather target an easy, weak prey over a healthy animal. As a keystone species, sharks are instrumental in maintaining a balanced ecosystem. Without the presence of sharks, a devastating domino effect would impact populations throughout the food chain.

Sharks also carry cultural significance to many coastal indigenous peoples. In Hawaiian culture, ancestral shark gods called manō kumupa‘a were regularly worshiped. In the legend of the volcano goddess Pele, her elder brother Kamohoali‘i, a manō kumupa‘a, took the form of a shark and led Pele and her siblings on a voyage from her ancestral home in Kahiki to the shores of Hawai‘i. It was believed that Kamohoali‘i resided in Kīlauea, Hawai‘i Island overlooking the crater of Halema‘uma‘u, an area deemed so sacred that Pele would not blow smoke across it. 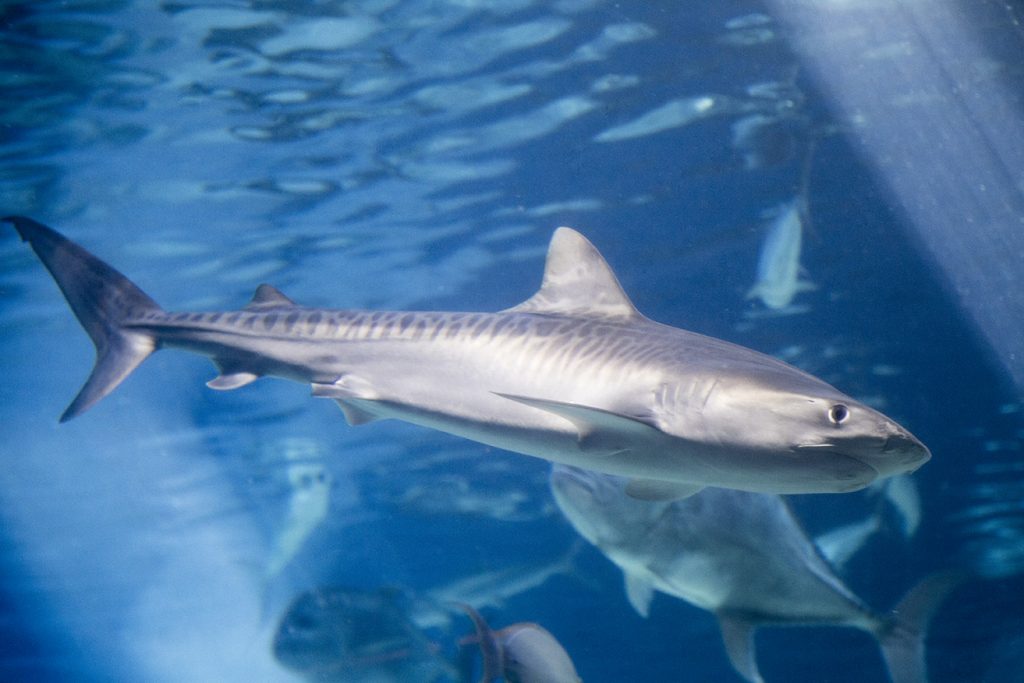 Many assume that shark ‘aumākua are tiger sharks, but other shark species could also have been ‘aumākua as well.

For some Hawaiian families, performing a protocol would deify or transcend a specific ancestor into an ‘aumakua, a spiritual guardian that would protect and guide members of the family. The ancestor would manifest into a physical form, whether a shark or other animals and plants, that would be recognizable to the family. Those who had a shark as an ‘aumakua would often designate a relative to protect, feed, and take care of the family’s ‘aumakua. Numerous stories exist of shark ‘aumakua saving family members from drowning as well as aiding fishing families by driving fish into their nets. 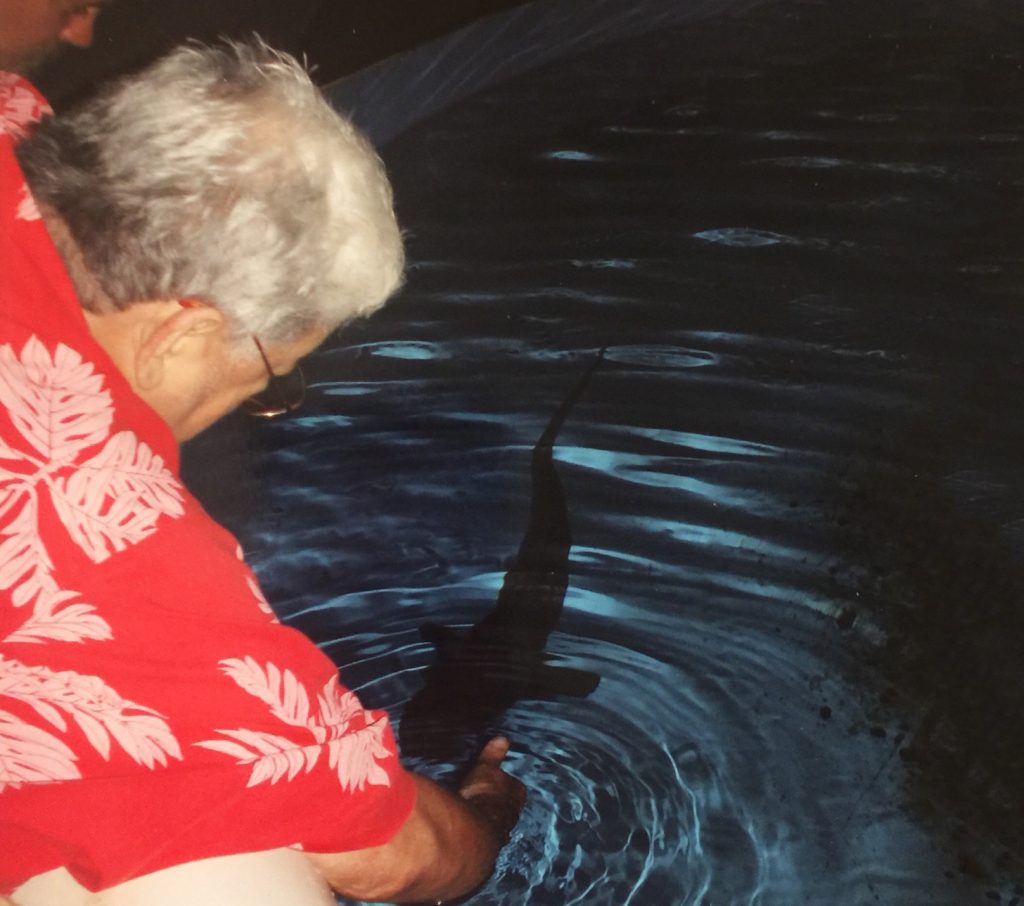 Out of respect for Hawai‘i’s sharks, Maui Ocean Center’s founding Hawaiian Cultural Advisor, Kahu Charles Maxwell established a welcoming protocol for sharks under the Aquarium’s care. Every shark that enters Maui Ocean Center is met by the Aquarium’s Cultural Advisor who asks the shark for guidance, permission to be here, forgiveness if any unintentional harm is caused, and to teach visitors about sharks while fostering reverence for animals like it. A similar protocol is held when the shark is returned to the sea.

Today, it is well known that sharks have a significant role in both Hawaiian culture and marine ecosystems. Unfortunately, sharks are still shrouded in misconceptions about their true nature. An influence by pop culture and media has created an artificial, sensationalized fear of sharks, but it’s important to realize that having a degree of fear of sharks is a natural reaction. Sharks are predators and have the potential to be dangerous in certain situations just like any other wild animal. Poor ocean conditions and mistaken identity can lead to unfortunate shark encounters with humans, but considering the vast number of people in the water every day, it is clear that any negative interactions with sharks are rare anomalies.

Hawai‘i’s ocean and marine life are simply too unique to not experience out of fear of shark encounters. In the sense of countershading, perhaps we too often look down at the dark side of sharks rather than up at the light where the positive impacts they have on our ocean are clearly visible. If we choose to view sharks from a different angle, perhaps fear will fade in favor of wonder and admiration for one of the ocean’s oldest caretakers. As we learn more about sharks and dispel age-old myths, the greater our appreciation, understanding, and respect will be for their rightful place in nature and cultural beliefs.