Narrow silvery-white stripes splash across the Hawaiian squirrelfish’s brilliant red body. Its dorsal fin is a deep red with silvery tips and it has large, dark eyes. Known to be skittish and apt to dart about in a nervous fashion when discovered under a ledge or in a cave, the Hawaiian squirrelfish hides during the day and comes out only at night to search the reef for food. To humans, a fish’s red coloring and large eyes are often an indication that we are looking at a nocturnal fish.

This reclusive fish shows a distinct preference for tiny crabs and shrimps found near the ocean bottom. Its near relatives, the soldierfishes, forage on zooplankton higher in the water column. The Hawaiian squirrelfish can reach a maximum size of 6.5 inches and is most often found in schools of its own kind, but its precise depth preferences and lifespan in the wild as of yet are not well documented. 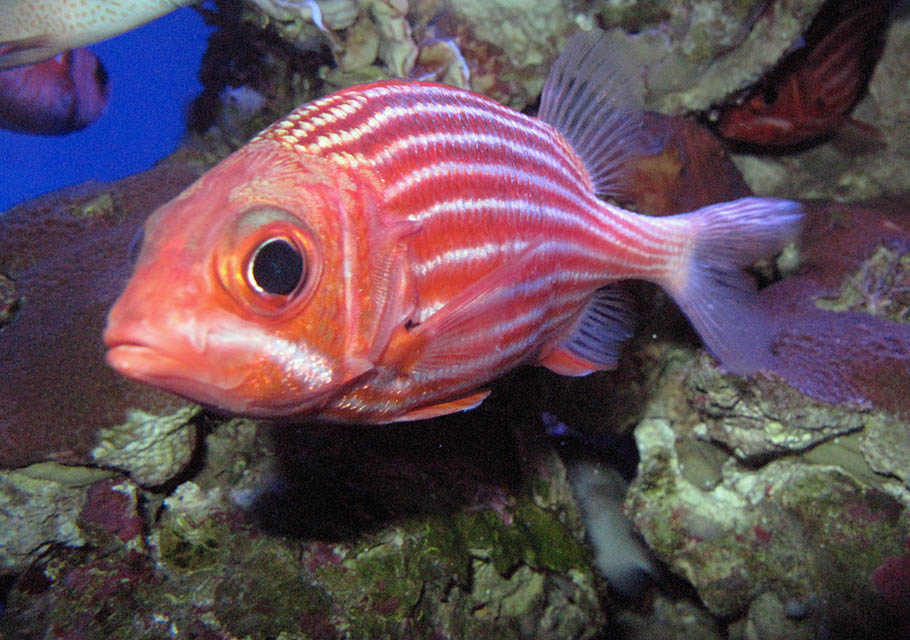 Often spotted peering out from holes in the reef, the Hawaiian squirrelfish will quickly flee when approached.

Squirrelfishes generally are narrow-bodied, spiny, prickly, highly sensitive, and secretive. The name squirrelfish may derive from their skittish behavior or related to the fact that they can produce a sound similar to a squirrel’s bark. Both squirrelfishes and soldierfishes produce vocalizations by contracting muscles that cause vibration of their swim bladders. These vocalizations, delivered singly or in bursts, serve as a little-understood communication system that has long fascinated scientists. They are not the only fish to “talk” to one another, but their grunts, chirps, growls, and staccato sounds are unique and believed to be associated with courtship, aggression, and deterrence of predators.

The predominantly red coloring of squirrelfishes is the result of protective evolution. The color red is the first color to “disappear” as light diminishes in the ocean’s depths. The deeper one goes, the less likely it is that the color red can be spotted. In deep water or at night, redfish appear gray or black in color and blend perfectly into their surroundings. Predators have a hard time seeing them.

Maui Ocean Center often exhibits the Hawaiian squirrelfish, as well as other squirrelfish and soldierfish species, in the Living Reef building.

Due to the constant rotation of animals back to the ocean, the presence of any specific animal cannot be guaranteed.

Originally published in The Maui News on Sunday, November 1, 2015. Pam Daoust is a Contributing Writer for Maui Ocean Center. Ka Mo’olelo Moana, or “the Ocean Story,” is a monthly column submitted by Maui Ocean Center staff members and contributing writers.