Unless one is diving or snorkeling on a regular basis, it’s all too easy to forget how incredible the marine life in the surrounding ocean truly is. Busy with our own lives, we can lose our sense of wonder and start taking these marvels for granted. 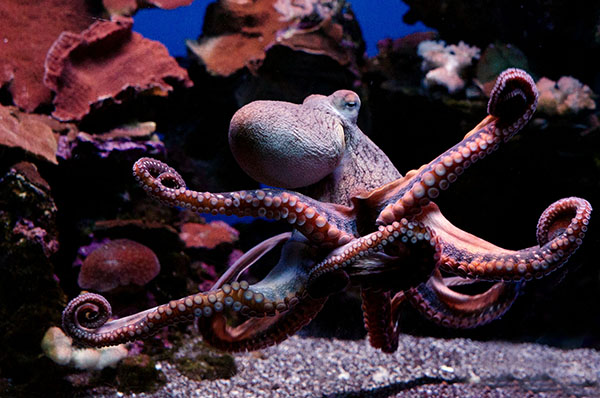 Consider the he‘e mauli or day octopus: At four to five pounds with a maximum arm span of three feet, the he‘e can swiftly change color and texture to resemble its surroundings and protect itself from predation. Males display light and dark stripes when trying to attract females. Mating only once in its yearlong lifetime, the male transfers sperm packages (spermatophores) to the female and then dies. The female lays strings of eggs on the ocean floor, fertilizes each egg with the male’s sperm, and guards them for four to six weeks. During this time, she slowly starves to death, eventually becoming food for her emerging offspring.

Sounds like science fiction, doesn’t it? Yet, it is fact.

Then there’s the rarely seen blue whale (Balaenoptera musculus), one of the largest creatures ever to live on Earth. This elusive inhabitant of the world’s oceans can weigh up to 330,000 pounds and live 80 to 90 years. Blue whales are believed to migrate through Hawaiian waters en route to and from polar feeding grounds. Like humpbacks, they mate and give birth in warmer climates. They begin reproducing at six to ten years of age, with females giving birth every two to three years thereafter. The average length for mature males is 74 feet and 79 feet for females. Individuals as large as 110 feet have been reported. Prior to the enactment of protections in the mid-1960s, blue whales nearly became extinct. Today, this behemoth inspires awe in anyone lucky enough to see one.

Another creature we could scarcely imagine if we tried is the cookiecutter shark (Isistius brasiliensis). This green-eyed, bioluminescent, open ocean-dwelling shark, only 17 to 20 inches long, comes equipped with sucker-type lips and razor-edged teeth. It feeds by taking cookie-shaped bites or plugs of flesh out of creatures much larger than itself. Whales, tunas, dolphins and even great white sharks are fair game. Light emitting organs called photophores enable the cookiecutter to glow a bright green or flash like a strobe light when attracting a meal.

The Maui Ocean Center exhibits the he‘e along with other equally amazing creatures: colorful wrasses that can switch gender (female to male) as needed to maintain a harem; orange cup corals that can open and wave its tentacles in anticipation of being fed; male sea horses who carry the eggs of baby seahorses and give birth to as many as 300 offspring at a time; flat fishes who begin life with eyes placed symmetrically, one on each side of their heads, but then one eye (usually the right) migrates to join the opposite eye; unicorn fishes who resemble unicorns—well, sort of—and many other wonders.

If these aren’t astounding enough, previously unknown life forms in the darkest depths of the ocean are still being discovered. While exploring this last frontier on earth, scientists regularly encounter unidentified species in places where life seems impossible. Such exciting events remind us that nothing in the ocean should be taken for granted; it is a place of endless mystery and jaw-dropping surprise.

Due to the constant rotation of animals back to the ocean, the presence of any specific animal at Maui Ocean Center cannot at be guaranteed.

Pam Daoust is a Contributing Writer for Maui Ocean Center. Ka Mo‘olelo Moana, or “the Ocean Story,” is a monthly column submitted by Maui Ocean Center staff members and contributing writers. Originally published in The Maui News on Sunday, March 6, 2016.