The conditions were perfect for the job. A favorable forecast of light tradewinds and ocean conditions opened a window of opportunity to cross the ʻAlenuihāhā Channel. On the vast open sea, the stillness of the ocean erupts from a passing fishing vessel. Like many before it, watercraft of all sorts have traversed Hawai‘i’s channels to reach neighboring islands. But this vessel isn’t out on its normal fishing duties – it’s carrying a special fish to its future home on Maui.

Within the ship’s hull, a 100lb giant grouper named “Mac Nut” rests in the livewell, a space filled with the constant circulation of seawater. Mac Nut was raised in an aquaculture facility on the Big Island before her relocation to a resort’s saltwater pool, where she swam among hotel guests and schools of Hawaiian fish. But as she grew, people grew wary of her large size.

At the age of six, Mac Nut was in need of a new home but could not be released into the wild due to her disfigured jaw, the result of an injury earlier in her lifetime. Some feared it would hinder her ability to hunt and eat freely. When a family at the resort learned of her situation, they generously offered to sponsor Mac Nut’s transportation from the Big Island to Maui where the Maui Ocean Center agreed to take Mac Nut in under its care.

Safely moving a 100lb fish proved challenging. The team looked toward the sea, and a local fishing charter, to take her across the ʻAlenuihāhā Channel, a notoriously windy and turbulent body of water which name loosely translates as “great billows smashing”.

Nearly a year ago, favorable wind and ocean conditions enabled a channel crossing for Mac Nut. With lake-like conditions, the fishing vessel departed from Kona and steadily made its journey to Ma‘alaea Harbor. She arrived safely at Maui Ocean Center where she cleared the Aquarium’s quarantine and acclimation process, and in due time, was introduced to her residence in the 750,000-gallon Open Ocean exhibit. 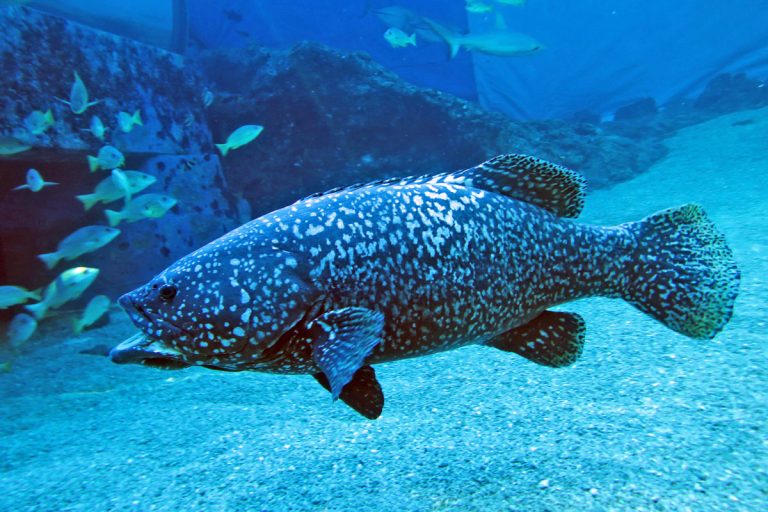 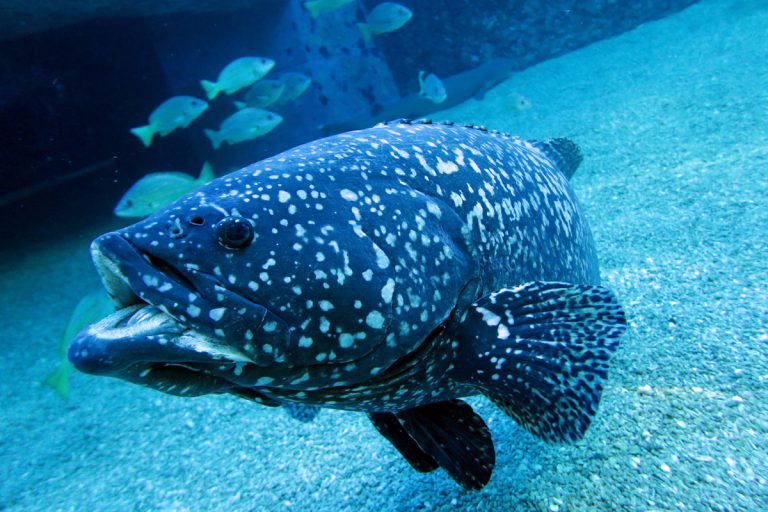 After a year at the Aquarium, Mac Nut is doing well and a standout among the Hawaii fish, sharks, and rays in the Open Ocean exhibit. Her large body, mottled pattern, and slow-paced demeanor is calming and casual. Known to be highly intelligent and curious beings, giant groupers are believed to have the ability to recognize individual divers. Unfortunately, this inquisitive behavior in the wild makes large groupers vulnerable to being targeted by spearfishers, which has contributed to their population decline over the years.

At Maui Ocean Center, Mac Nut has bonded with our staff divers. Because of her distorted mouth, our team conducts “target feeds” which involves placing food directly into the fish’s mouth. She often approaches our divers and waits patiently, indicating that she’s ready for a meal.

Giant groupers (Epinephelus lanceolatus) like Mac Nut are extremely rare to see in Hawai‘i but are found in other parts of the world including the Indo-Pacific and Red Sea. The first documented giant grouper by an ichthyologist in Hawai‘i didn’t occur until 1989 when a fisherman caught a giant grouper over 500lbs in Kihei, Maui. Growing up to 9ft in length and 900lbs, sightings of giant groupers typically occur in deep-water habitats.

Mac Nut is one of several Hawaii fish species at Maui Ocean Center that reside here as a result of a relocation or aquaculture program. The next time you visit the Open Ocean exhibit, be sure to scan the bottom of the exhibit for our bottom-dwelling friend. She provides a unique opportunity to see, learn, and connect with one of the lesser-known Hawaii fish species.

March 9, 2020 Evan Pascual
In the vast Pacific Ocean, Hawai‘i’s coral reefs reign as one of nature’s greatest marvels, home to some of the world’s most unique marine animals. Beneath the waves where earth-toned corals a...
Read More
RESERVATIONS REQUIRED