Anemone wielding, armor-plated, bug-eyed aliens of the sea – what’s not to love about crustaceans?

The word crustacean may sound boring, but our bottom-dwelling friends are far from it! While turtles, dolphins, and whales have won the hearts of Hawaii’s residents and visitors, it’s easy to overlook our crabby friends tucked away in the reef. The thought of people being uninterested in crustaceans or unaware of their amazing abilities creates heartbreak and many restless nights for our team of marine naturalists. To remedy this dilemma, here are our staff’s top six picks to convince you that crustaceans are truly fascinating creatures! 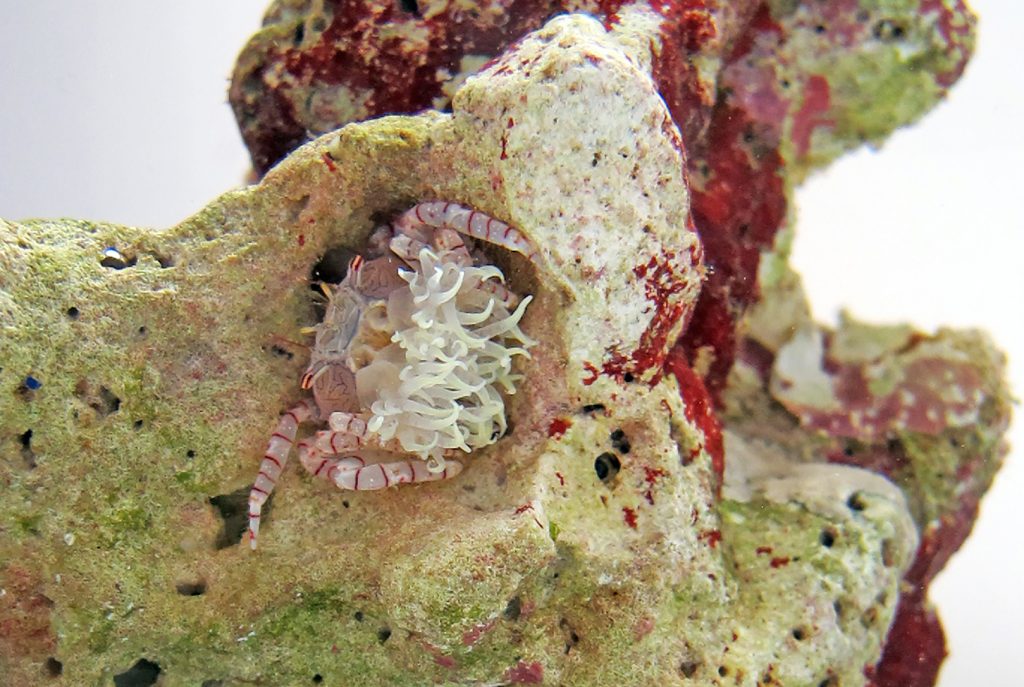 Get fired up on the sidelines with the Hawaiian pom-pom crab, one of several endemic crustaceans found only in Hawaii! This “tiny-mite” only grows up to one inch in carapace (shell) width and is often missed by snorkelers due to its small size and preference to hide under rocks and ledges. But make no mistake, this crab isn’t shy to put on a show! Nicknamed by some as the boxer crab, it holds and waves two live anemones armed with stinging cells to ward off predators. The anemones also score a free meal whenever the crab eats! 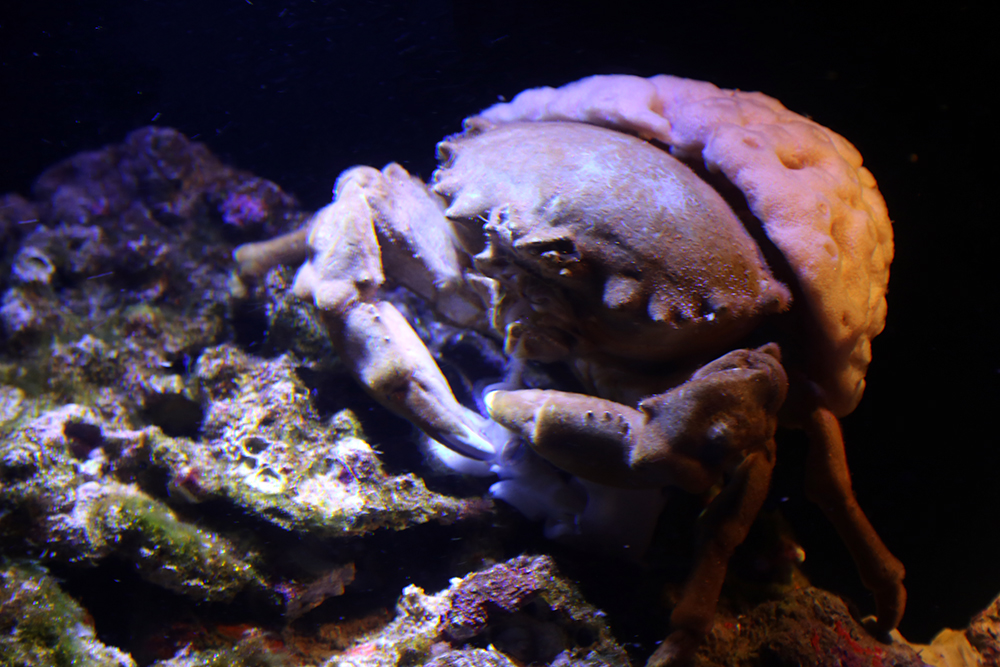 Imagine a world where crustaceans are 100x their size – pretty scary, right? Thankfully, the sleepy sponge crab only grows up to about eight inches in carapace width and is quite docile. This slow, lumbering, gentle giant walks on four legs as if it were sleepwalking. Two sets of rear, stubby legs are used to carry a sponge for camouflage. The sleepy sponge crab is very particular when choosing its “hat”. Once a sponge is chosen, it neatly trims it to a preferred size and shape. If a sponge isn’t present, the sleepy sponge crab will seek alternatives. Some have observed it wearing anything from a rubber slipper to a crown of thorns sea star! 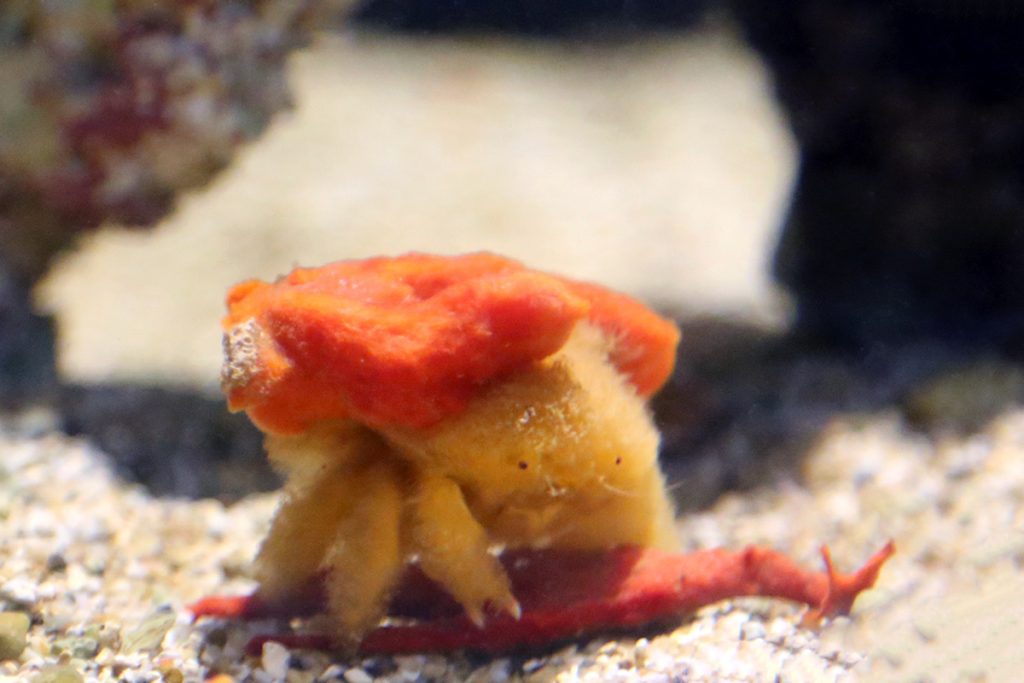 Did you know?
The smaller shaggy sponge crab is tiny compared to the sleepy sponge crab, growing up to only one inch in carapace width. Although well camouflaged, the shaggy sponge crab typically ventures out from hiding during the safety of nightfall. Its beady-eyes may appear black from afar, but they are actually white with bright crimson polka-dots! 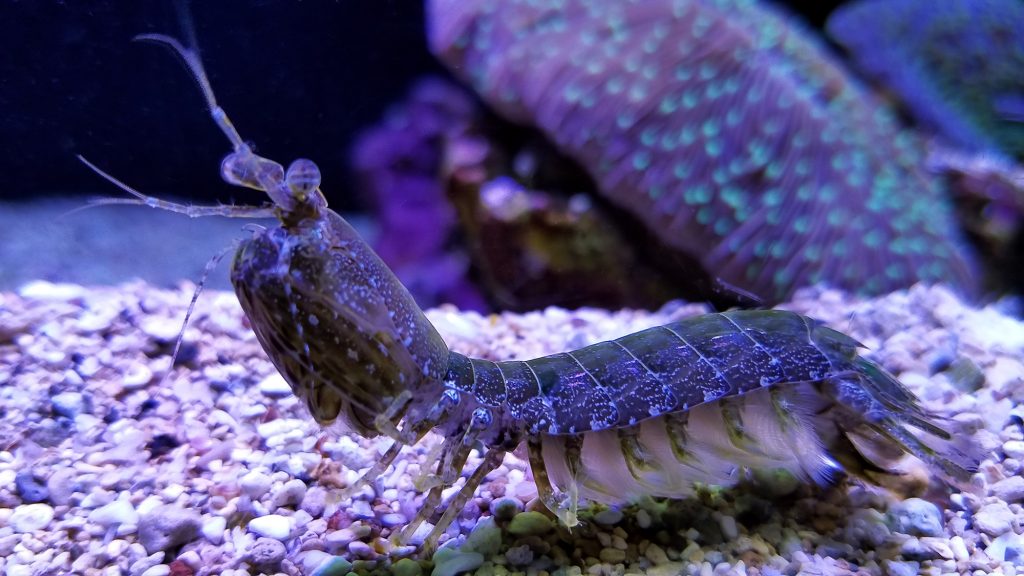 Float like a butterflyfish, sting like a mantis shrimp! You don’t want to tussle with this heavy hitter known by many fishermen as the “thumb-splitter”. Despite its name, this critter is technically a stromatopod, a distant relative to shrimp. Like the terrestrial praying mantis, the mantis shrimp keeps its arms folded and poised to strike. Mantis shrimp are typically “spearers” armed with barbed appendages to strike soft-bodied prey. “Smashers”, like the Philippine mantis shrimp above, use dactyl clubs to clobber their victim. Putting on its best Muhammad Ali impersonation, mantis shrimp pummel its prey with over 160lb of force and striking speeds of up to 50mph! Beautiful, aggressive, and highly intelligent, the mantis shrimp rules its realm on the reef.

Did you know? Mantis shrimp eyes move independently with trinocular vision and can see more colors than human eyes! 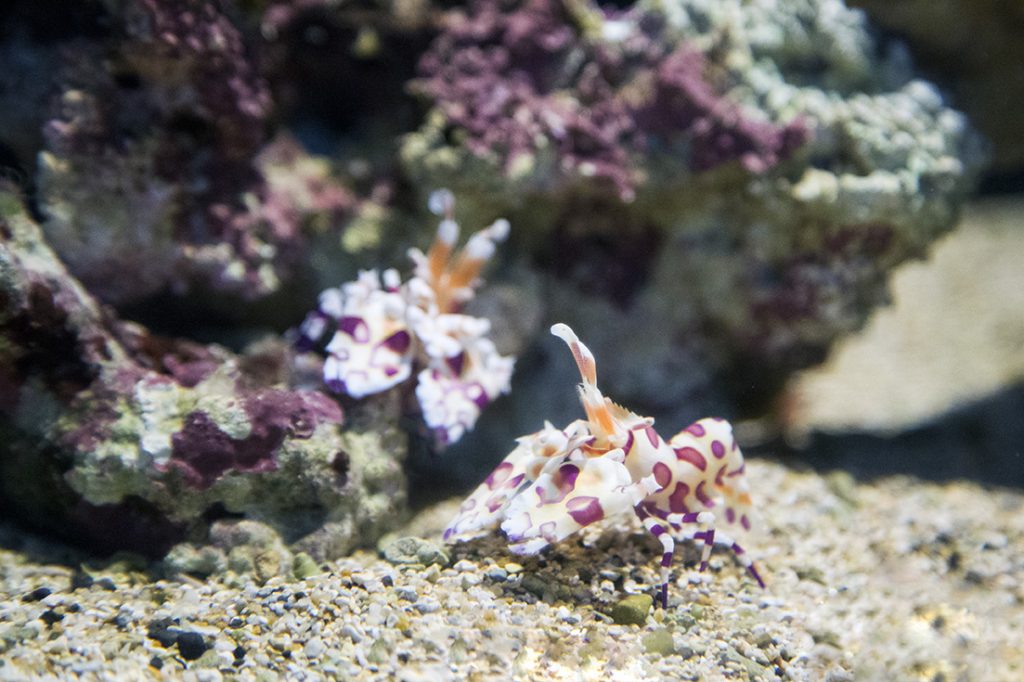 Meet the Bonnie & Clyde of the sea. The flamboyant harlequin shrimp is often found with a partner and is known to form a bond for life. As beautiful and intriguing as they are, harlequin shrimp are fierce predators that work together to hunt their primary prey: sea stars. Working in unison, the harlequin shrimp immobilizes its prey by grabbing hold with its rear legs while using its pincers to push off the ocean floor. With enough momentum the sea star is eventually flipped on its back. Growing up to only two inches in length, the small yet mighty harlequin shrimp is incredibly strong.

Did you know? Not all sea stars are doomed to this fate! In a defensive maneuver, sea stars can detach a limb and escape. Over time, the sea star will regenerate any lost or damaged limbs. 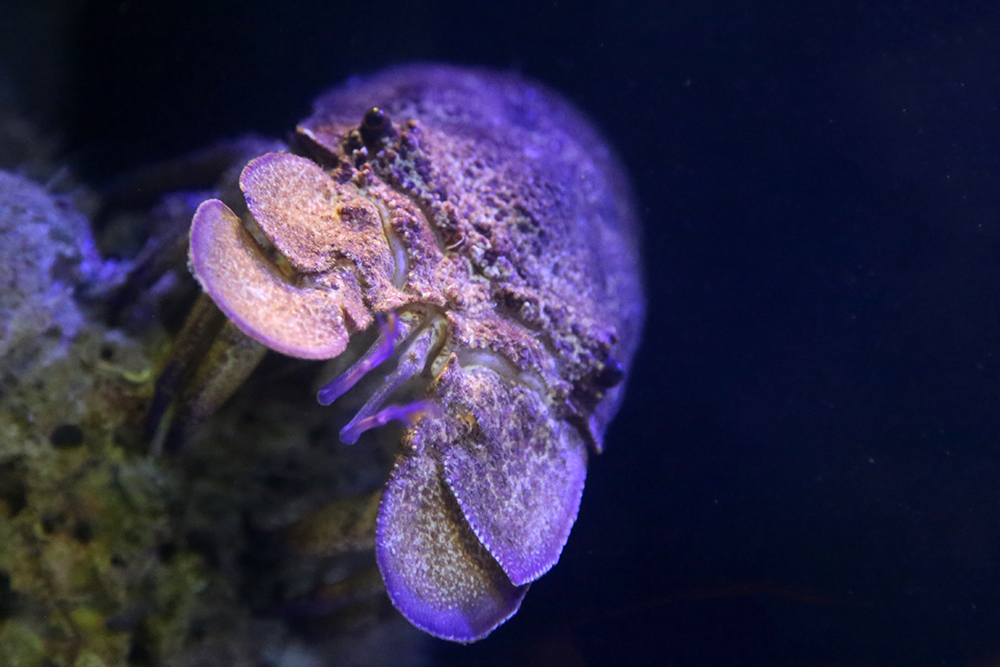 Slippers are synonymous for flip-flops in Hawaii, but if you’re busy looking down at your feet you’ll miss seeing the stealthy slipper lobster. Typically found clinging to roof caves or tucked away in reef crevices, the slipper lobster is a heavily armored tank that lacks pincers and sharp spines. This lobster depends on camouflage and a tough exoskeleton to survive on the reef. Of the five known species in Hawaii, the scaly slipper lobster pictured above is the second largest species and can grow up to 16 inches in length. 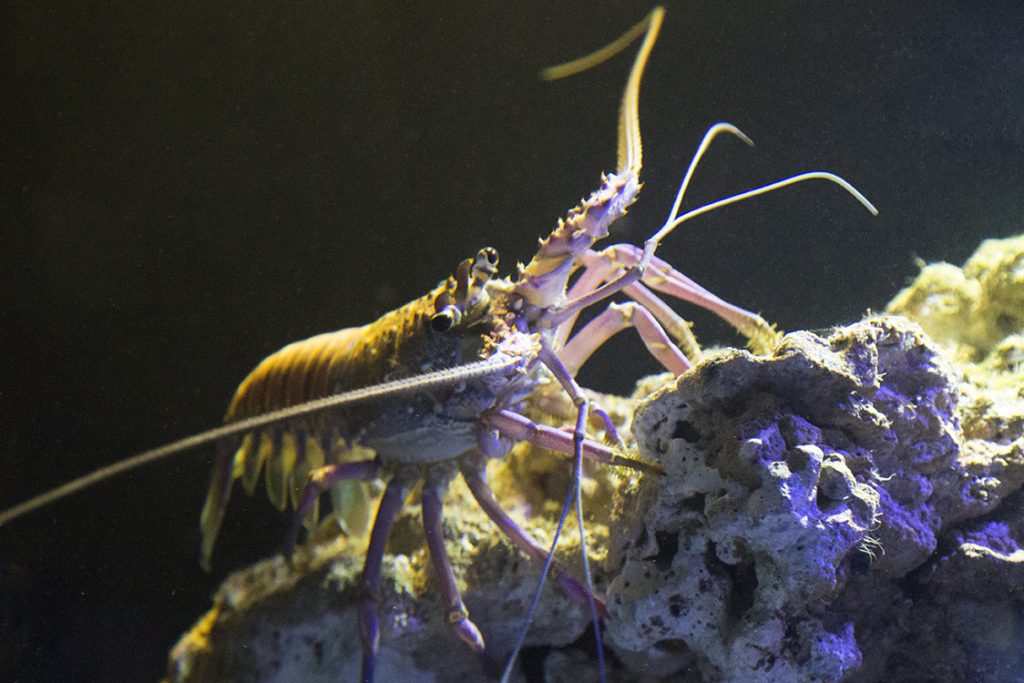 Hold the butter! Yes, it’s true, the banded spiny lobster is a popular food resource among local fishermen and divers, but they’re more than just a dinner entrée. Unlike the famous Maine lobsters, the Hawaiian banded spiny lobster is clawless. True to its name, this lobster relies on a fortress of sharp, spiny projections on its carapace and antennae for protection. The banded spiny lobster can communicate or threaten predators through stridulation by rubbing its antennae together to create an aggressive, buzzing noise.

Did you know? Of the four spiny lobster species, the banded spiny lobster is the only endemic species. In early Hawaii, ula were sometimes substituted for pigs in sacrifices to the gods! 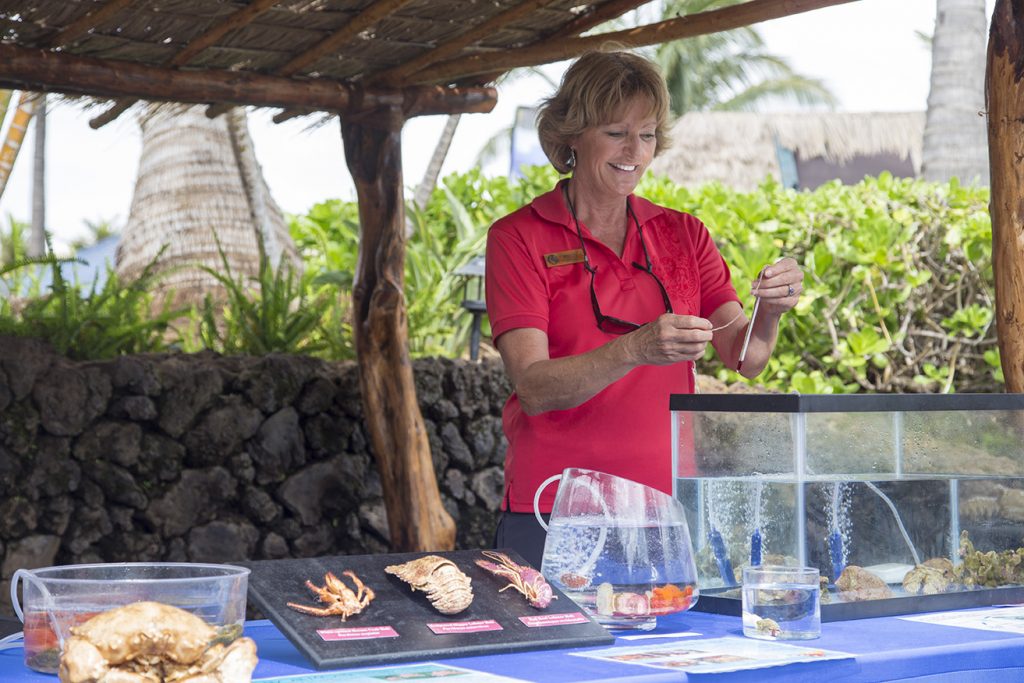 Still not convinced that crustaceans are amazing? The next step is to head down to Maui Ocean Center and visit the Crustacean Explore Station! Through the end of April, join a marine naturalist every Tuesday and Sunday from 11:30am to 2:30pm to see live crustaceans, molts, and learn about the different crabs, lobsters, and shrimp found in Hawaiian waters. Throughout the year you can encounter numerous live crustaceans in the Living Reef building, featuring three exhibits dedicated to Hawaii’s crustacean ‘ohana.