October welcomes the Halloween season, a time to conjure up your best costume and adorn your house with carved pumpkins. But beneath the sea, our marine life friends don’t need a mask to put on a fright. Many of them naturally evoke the mysteriousness and eeriness of the Halloween spirit. 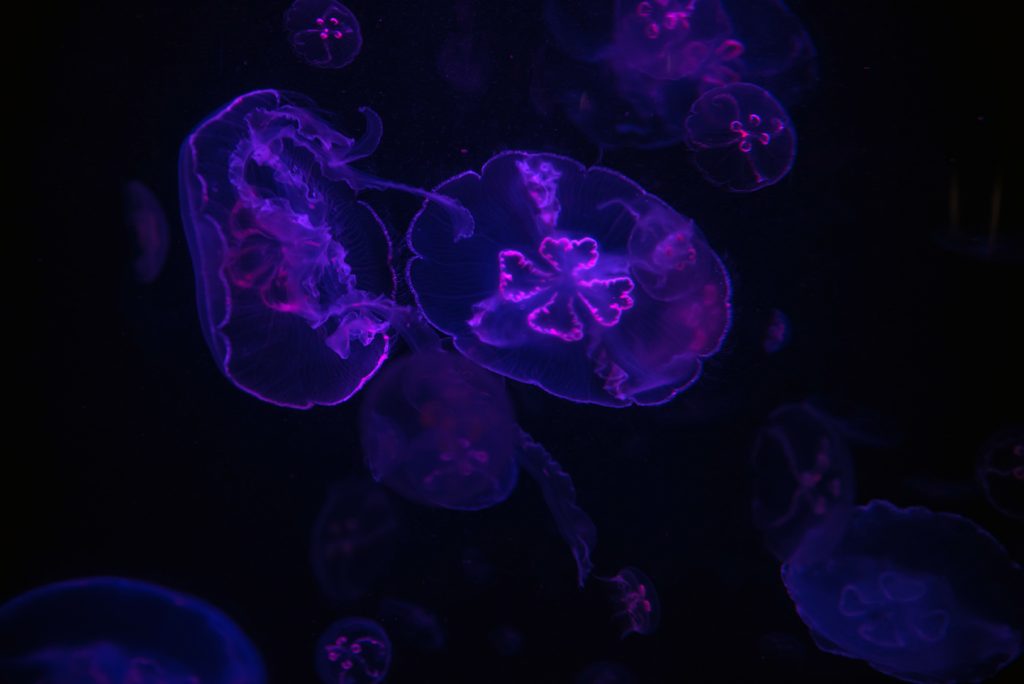 Lurking beneath the ocean’s surface is a creature with no eyes, heart, blood, or brain – one could imagine they’re the “zombies” of the sea. They congregate in masses with their saucer-shaped bodies pulsating as they drift along the ocean’s currents. Slow, majestic, and mesmerizing, the sea jelly is a creature to marvel at.

There are over 200 species of sea jellies found throughout the world but only 15 are known to inhabit Hawaiian waters. The moon jelly is one of the more commonly seen species. Although many call them jellyfish, the term is actually inaccurate. Jellies do not breathe through a set of gills the way fish do, instead, they absorb oxygen through their tissue. 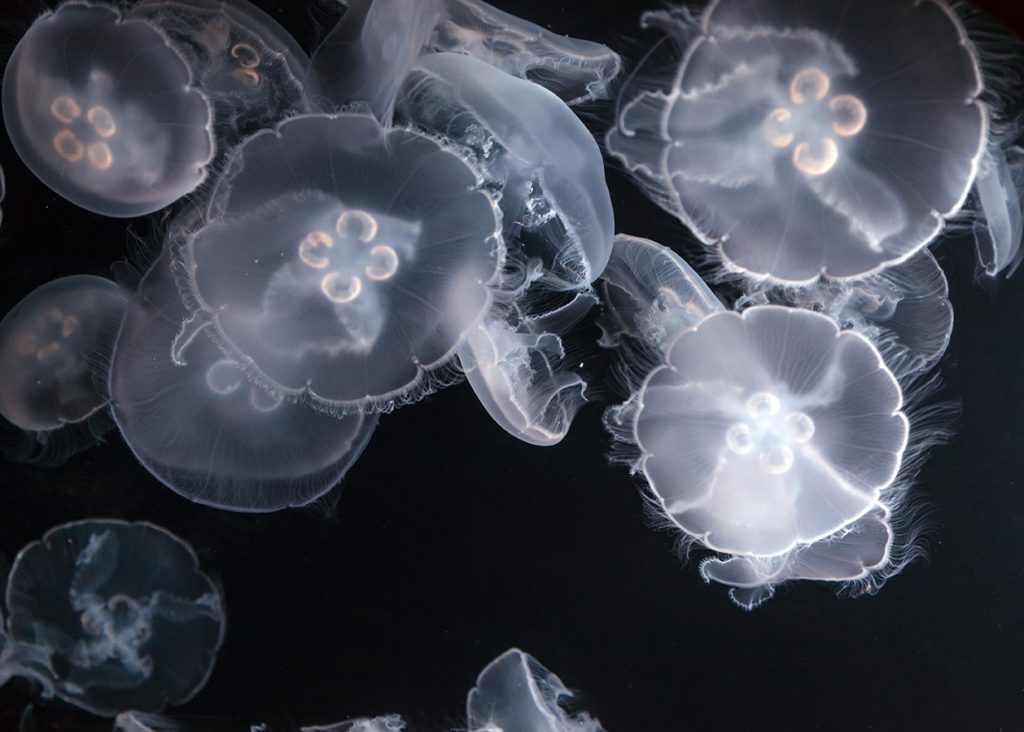 With a ghostly white appearance, the moon jelly has a central mouth surrounded by four rings that serve as reproductive and digestive organs. Oral tentacles hang from these rings and the edges of its flanged body contain hundreds of fine stingers, or nematocysts, which catch its prey. Unlike the hostile nature of zombies, the moon jelly is generally harmless to humans. Its sting is hardly noticeable unless you have very sensitive skin.

At the Maui Ocean Center, the moon jellies take center stage in the Sea Jellies exhibit. Their graceful movement paired with color-changing lights presents a grand display for guests to see. Moon jellies are one of the most commonly raised animals in aquariums worldwide. Because moon jellies are less common on Maui and have a short lifespan, Maui Ocean Center sometimes receives adult sea jellies from the Waikiki Aquarium on Oahu. The adult sea jellies then produce polyps within the exhibit which are collected and raised behind-the-scenes in the Aquarium Lab. 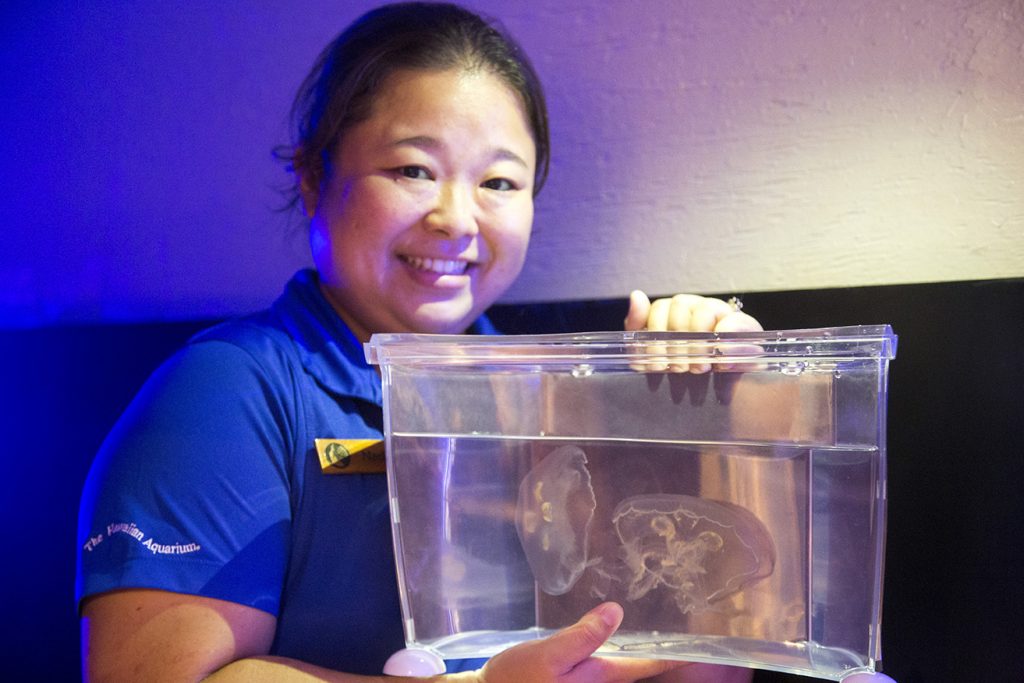 Like a scene out of Frankenstein, a scientist works behind closed doors surrounded by buckets of churning water, petri dishes with tiny specimens, and an array of instruments at the ready. This is where Nadine the aquarist breathes life into the next generation of moon jellies. Although she works in a sophisticated lab, Nadine is far from the “mad scientist” stereotype of horror films. She is nicknamed the “Jelly Mama” by her team for her passion, enthusiasm, and experience in raising moon jellies, an animal that undergoes a complex lifecycle to reach adulthood.

The life of a moon jelly at the Aquarium begins as a tiny polyp collected from the Sea Jelly exhibit. At this stage, the polyps remain dormant in chilled water waiting to be awakened by the right water conditions. By raising the water temperature, the polyps are induced to strobilation resulting in asexual reproduction. Stacking onto one another, the polyps release tiny, free-floating larval sea jellies known as ephyra. Over the next several weeks, Nadine and the aquarists provide ample aeration, water circulation, and feeding to help the ephyra develop into the medusa stage. 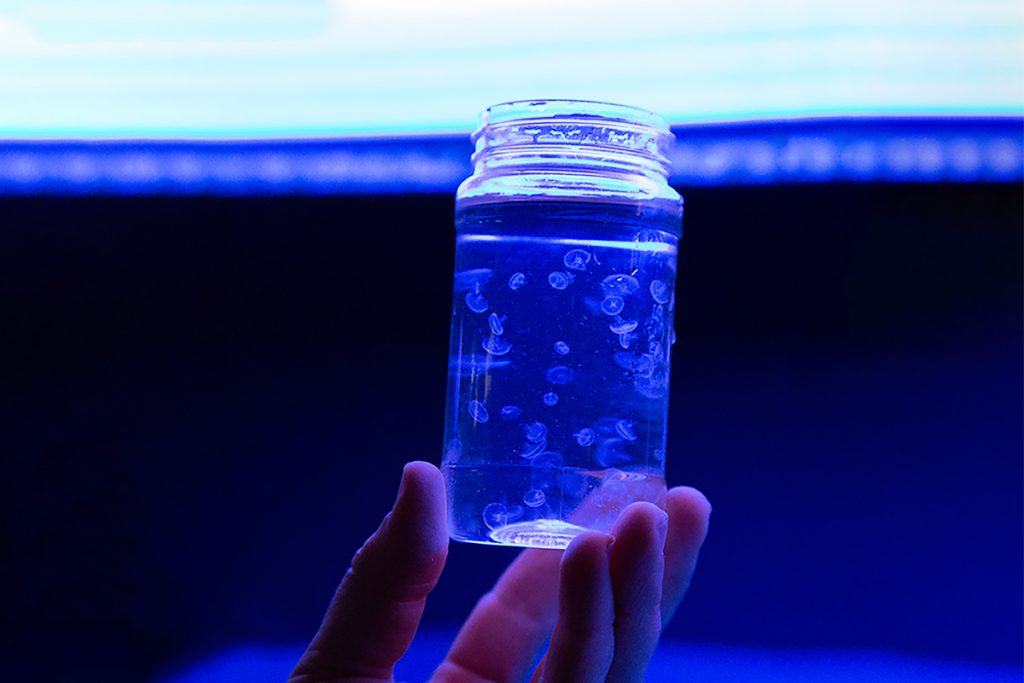 As a medusa, the young sea jelly has reached its full form bearing the bell-shaped body, central mouth rings, and dangling tentacles. When the medusa reaches five inches in diameter, Nadine begins to acclimate the medusa into their new home in the cylindrical Sea Jelly exhibit.

The moon jelly is just one example of the many magnificent creatures that dwell in Hawaiian waters. With Halloween creeping around the corner, now is a great time to recognize and appreciate the bizarre and mind-boggling creatures of the sea, many of which are quite docile like the moon jelly. It won’t take long to realize our ocean is home to animals whose appearance and behavior exceeds beyond our wildest imagination! 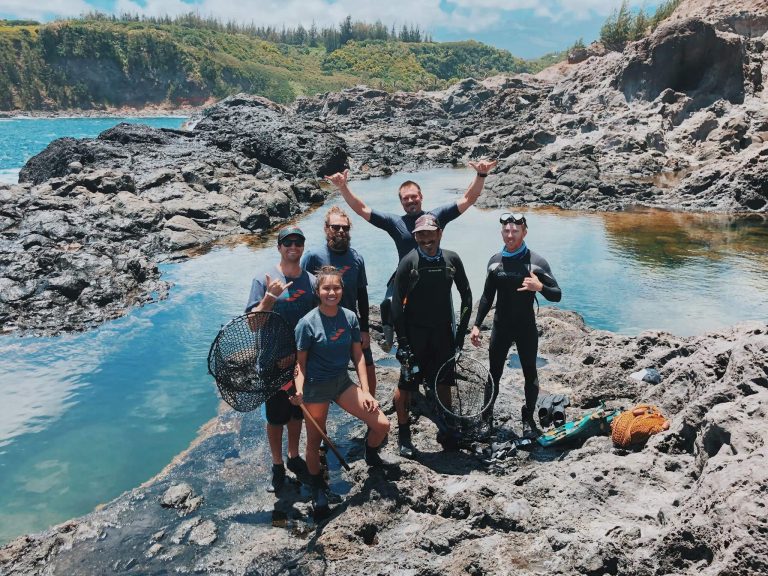