Hawaiian green sea turtles (Chelonia mydas), or honu in Hawaiian, can be seen close to shore foraging on seaweed (limu), and resting along Hawaii’s coral reefs. Here in Maui, honu are often seen on sandy beaches exhibiting a behavior called “basking”, which is unique to the Hawaiian Islands and Australia. They are the most common species of sea turtle in Hawaii and their population has been in recovery since being covered by the Endangered Species Act in 1978. These iconic creatures play a critical role in Hawaii’s coral reef ecosystem health, however much about their early life stages are still unknown to this day.

Honu reach sexual maturity between 15 to 25 years of age. From May through August, adult honu migrate to their mating and nesting grounds that are predominately in the Northwestern Hawaiian Islands. The female honu come onto shore past the high tide line and dig a nest chamber, where they lay a clutch of 75-100 eggs. They then cover the eggs, leaving the nest unattended to incubate for approximately 2 months. After incubating, the hatchlings dig their way out of the nest typically during the night when the sand is cool. Using the reflection of light from the moon and twinkling stars on the water, the honu hatchlings find their way to the ocean. However, countless dangers such as predators (crabs, birds, and reef fish), entanglement (plant roots and debris), and disorientation (light pollution) threaten their survival on their journey to the sea.

Once past the reef and away from most dangers, the honu hatchlings drift along the currents and gyres of the North Pacific for the next 5-10 years of their life before returning to the reefs. The tiny size of the honu hatchlings, along with the vastness and vagaries of the open ocean, make it difficult for scientists to study this stage of a honu’s life. Scientists refer to this period of time as the “Lost Years” since much about it remains unknown. From tiny hatchlings that fit in the palm of your hand, to dinner plate-sized juveniles, the one thing that scientists know for sure about the Lost Years is that the honu grow in size.

While drifting at sea, young honu will tuck their front flippers up over their back. Doing so changes their profile and decreases the chance of being sighted by predators. Accumulations of marine debris also provides protective camouflage as well as food. During the Lost Years, honu are omnivores, opportunistically feeding on macroplankton, such as sea jellies, small fishes, and anything else they can find while drifting in sea. As honu grow in size they are less prone to predation, and once large enough, they will return to Hawaii’s reefs. At this stage in their life, they become herbivores, feeding primarily on limu that grows close to shore. However, if an occasional sea jelly drifts by, it probably won’t stand a chance if sighted by a honu. 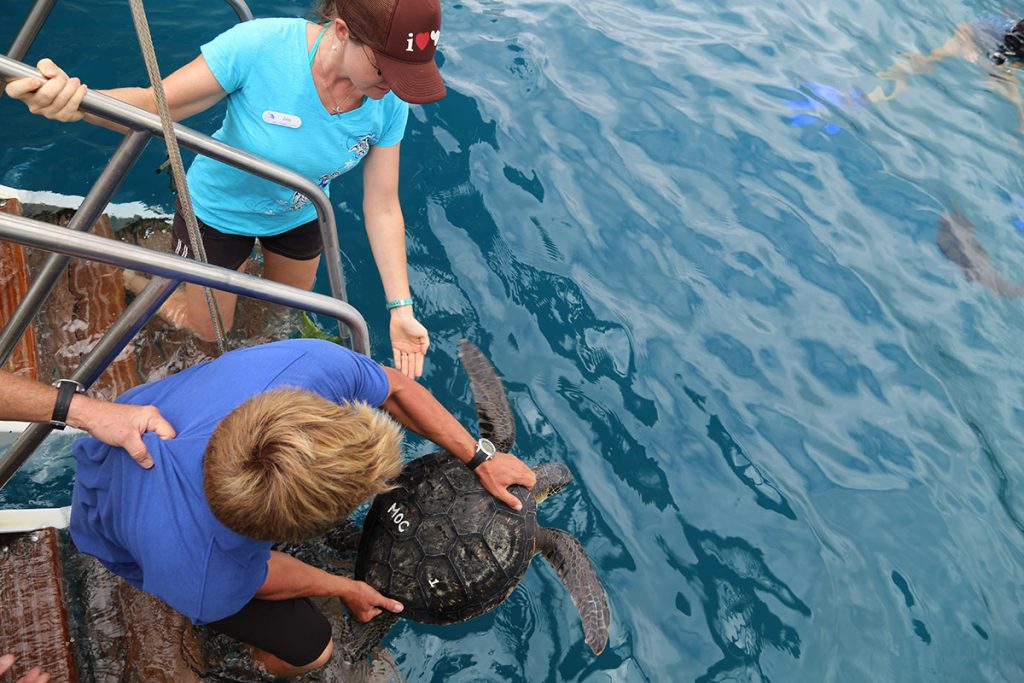 Each year, Maui Ocean Center receives six honu hatchlings from Sea Life Park on Oahu. This is part of Sea Life Park’s Hawaiian Green Turtle Educational Loan Program geared towards education, conservation, and awareness of these amazing creatures. Maui Ocean Center is preparing to release six, 2-year-old turtles into the ocean later this month. These honu have been a part of Maui Ocean Center’s ‘ohana since 2014.