Six Hawaiian green sea turtles (honu) were raised at Maui Ocean Center for two years and are now ready to meet the open ocean for the very first time. In the coming weeks, Maui Ocean Center’s staff will embark on a calm, ocean voyage for a special ceremony that will include a final blessing by Kahu Dane Maxwell, the Aquarium’s Hawaiian Cultural Advisor, and a farewell from the team that raised them.

These six honu were hatched at Sea Life Park Hawaii on July 4, 2015 and served as ambassadors of their species courtesy of the Hawaiian Green Sea Turtle Educational Loan Program. Meet the six honu who will soon call the open sea home:

2. Mohalu – At ease, relaxed
Starting Weight: 88g | Ending Weight 41.4lbs
Mohalu is known as the “chill” turtle, prefering to be reserved and laid back.

Lele – Fireworks
Starting Weight: 86g | Ending Weight: 41.8lbs
Kao Lele embodies the saying “big things come in small packages”. Despite being one of the smallest hatchlings, Kao Lele quickly grew up to be the largest of them all.

5. Koa – Fighter
Starting Weight: 86g | Ending Weight: 35.6lbs
Living up to its name, Koa is described as being feisty, bold, and always on the move!

6. Kunoa – Freedom
Starting Weight: 93g | 37.8lbs
Kunoa is quite evasive, preferring to reside in its own personal space. Hatched on The Fourth of July, it’s no surprise that Kunoa enjoys its independence and freedom!

Words from the Team 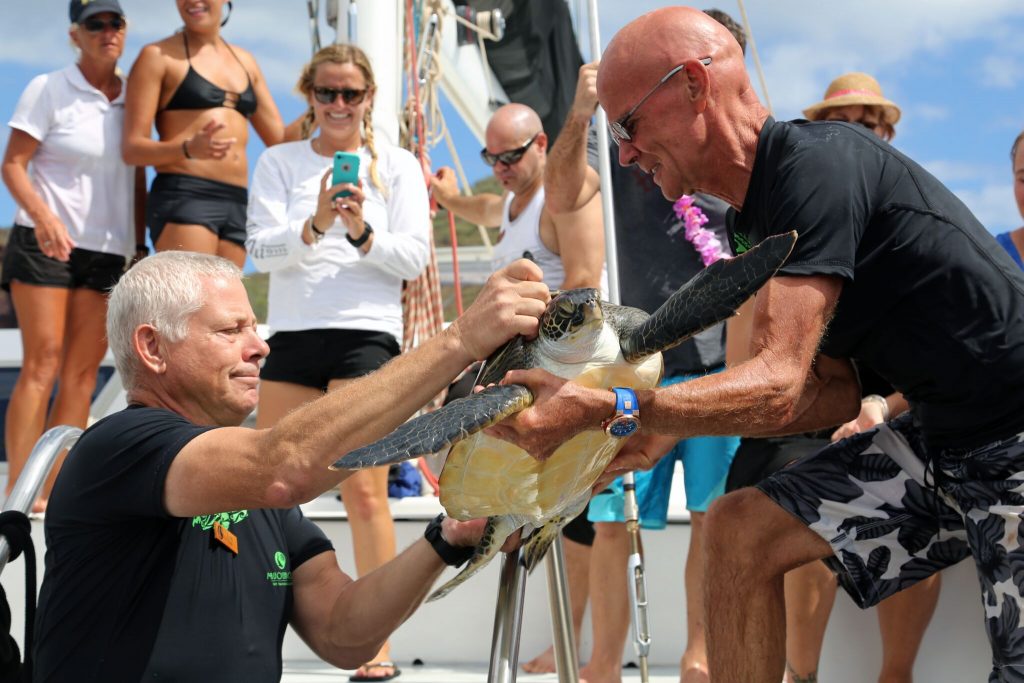 John Gorman, Head Curator (right):
“The turtles’ presence at Maui Ocean Center has been instrumental in fostering understanding, wonder, and respect for Hawaii’s endangered sea turtles among the kama‘aina and visitor communities. The education and conservation of Hawaiian green sea turtles is at the heart of who we are at Maui Ocean Center.” Above: Diver Scott Benson hands off a turtle to John Gorman during the 2016 turtle release.

Larissa Treese, Head Aquarist:
“We are honored to have played a role in the honu’s early development. As with all the turtles that have been released by Maui Ocean Center, we hope to once again cross paths with these honu in their natural habitat.”