If you were ever in search of a cool dip in the ocean to relieve you from the heat this summer, you may have been disappointed to find that the waters felt more like a luke warm bath rather than the comforting oasis you imagined it would be. Record-high summer temperatures have been felt across the entire Hawaiian island chain and coral experts have noticed the warm water temperatures too! The warmer weather has increased the water temperatures significantly, which resulted in large amounts of coral bleaching along the coasts of Maui.

Corals are tiny living animals that eat, grow and reproduce. They have a symbiotic relationship with an algae called zooxanthellae, but when water temperatures spike, the corals become stressed to this sudden change in their environment, causing them to expel the algae. This is called ‘coral bleaching’ and when it occurs, the corals will lose their color and turn bright white. Without zooxanthellae, corals are starved of their nutrients and energy, and may eventually die.

Our head curator, John Gorman, explained that coral bleaching is a natural process that happens from time to time. Although reefs typically recover, the part that is alarming is the intensity of the bleaching. The last major bleaching occurred in 1997, but does not compare to the bleaching that has been seen this year so far. Adding to that, Maui Ocean Center’s head aquarist, Larissa Treese, also mentioned that in 2014 higher than average bleaching also occurred, so the intensity of this happening two years in a row is also concerning.

Eyes of the Reef Hawaii Network and DLNR’s Department of Aquatic Resources encourages all ocean users around the islands to monitor and report the condition of the coral reefs, which will help to determine the severity and scope of the bleaching.

We are also participating in this statewide effort to monitor coral bleaching. In September, we began monitoring a section of the reef just off the Pali coastline (near the tunnel on Hwy. 30). Photos were taken to have a baseline for comparison. Then, on October 3rd, “Bleachapalooza” (a call-to-action encouraging coral monitoring and reporting) was held and we returned to the exact location of our previous dive. We noticed an increase in the amount of bright white corals present. Here are some photos and underwater footage of what we observed. 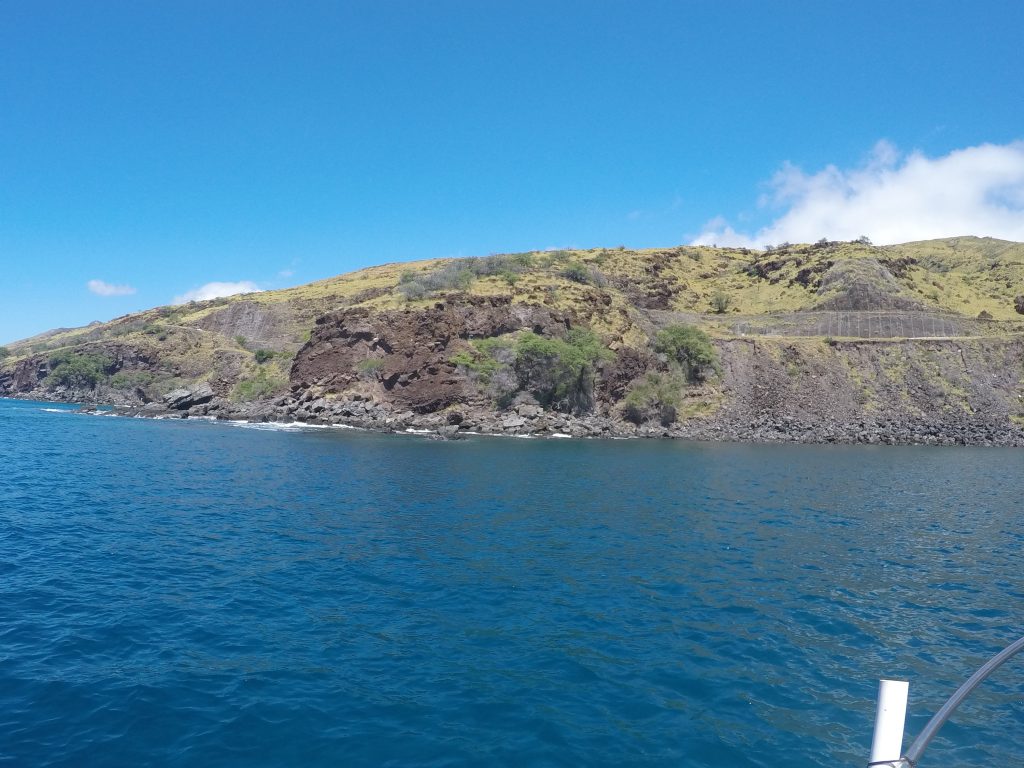 Dive site off the Highway 30. 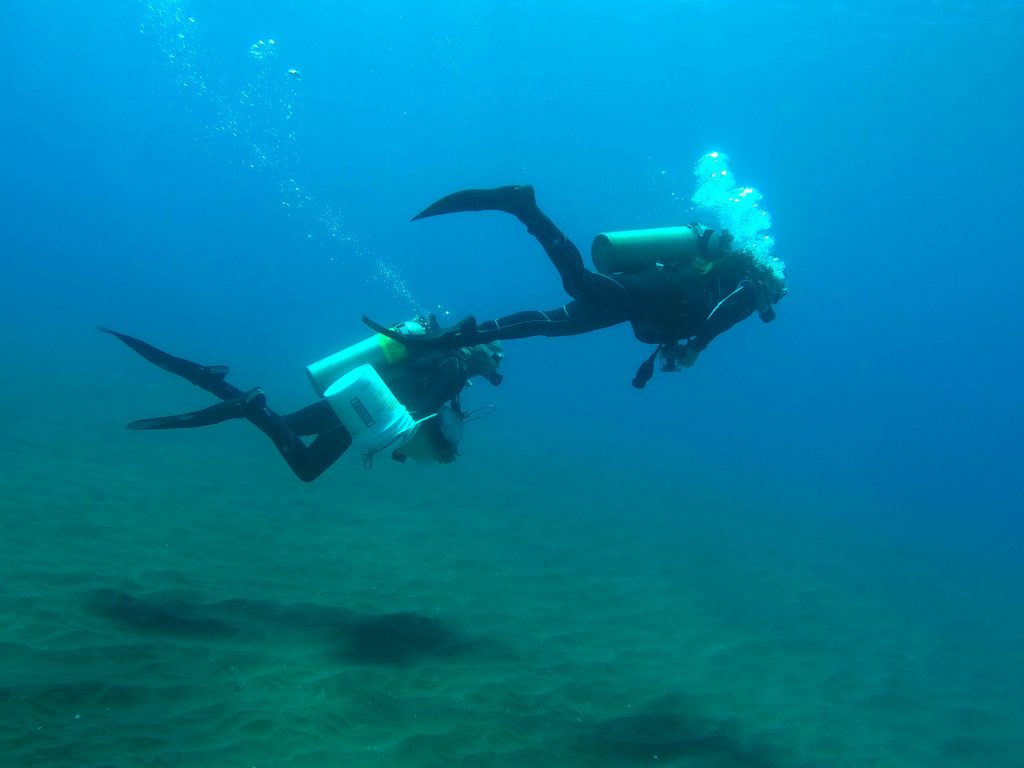 Maui Ocean Center divers making their way toward the reef. 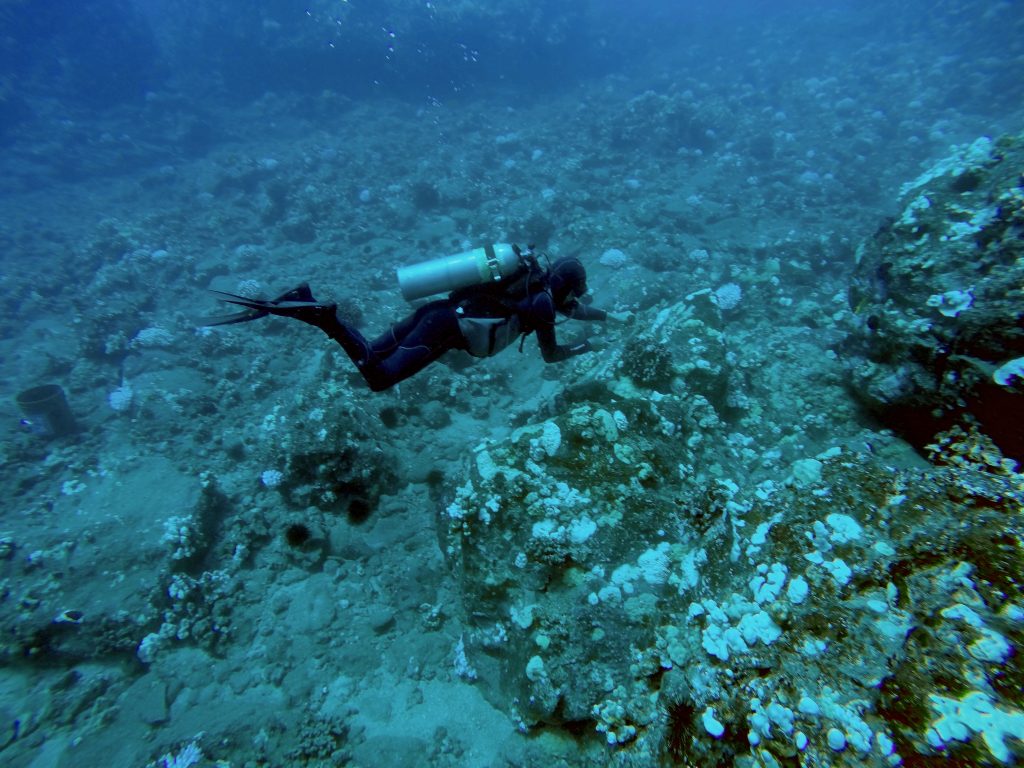 Numerous bright-white bleached corals are seen in the foreground and background of this photo of the reef. 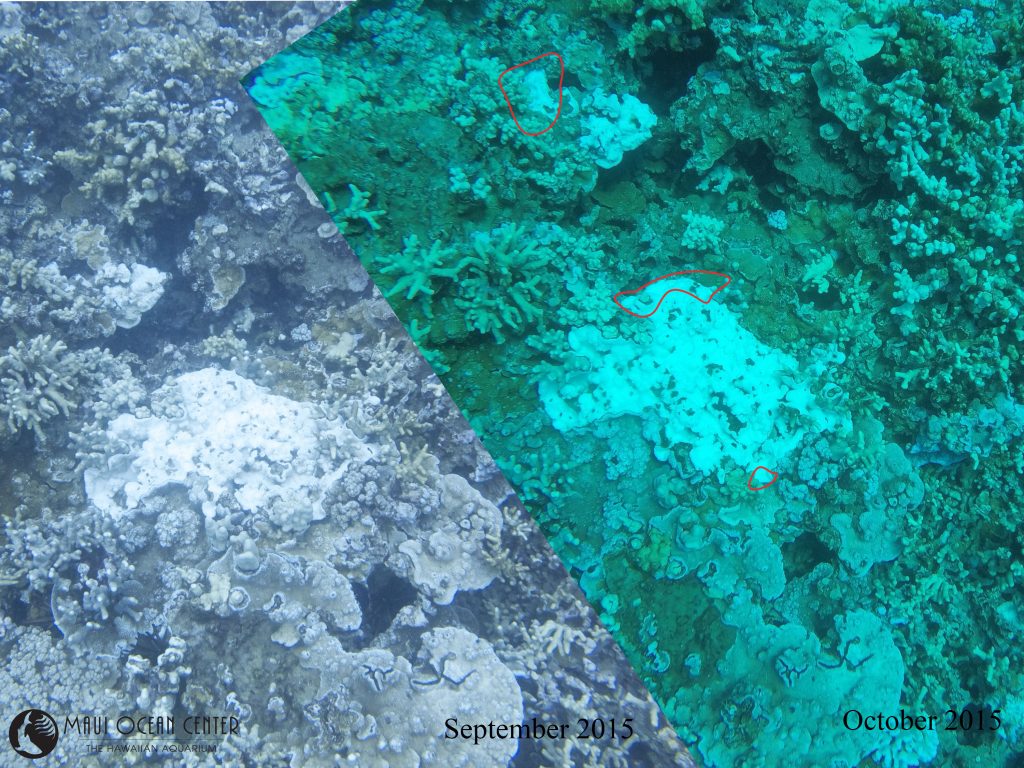 Comparison photos show a slight increase in coral bleaching for this particular area. Overall, we noticed a visual increase in the amount of coral heads that were bleached as compared to the previous dive in September.

John explains that most of the corals that are being affected by the temperature change are branching corals, which includes lace and cauliflower corals (Pocillopora sp.). However, other species have been affected as well, like the rice coral (Montipora sp.). In the case of the Pali coastline reef, the corals along the shore show more coral bleaching and gradually decrease as you get into deeper waters. This may be due to the fact that those corals are closer to the highway where sediment and runoff are abundant.

Scientists believe that the warm water temperatures will last through November and December, so the coral bleaching trend may continue through the winter. If you’d like to get your feet wet and do your part to help examine the reef you can; no training is necessary, just look for bright white corals. Report your findings, even if the coral is not bleaching, to Eyes on the Reef Hawaii at eorhawaii.org.

At this point, it is hard to tell if the reefs will be able to recover. Some factors that determine the corals’ ability to recover are its health prior to the bleaching and the impacts we as humans have on the ocean. The best way we can help the corals is by doing our part on land to minimize the stress that the reefs are facing right now.

Here are six simple tips to help save our coral reefs: