A local Maui girl, U.S. National Spearfishing Champion, certified culinary chef, award-winning artist – there’s nothing short of amazing in the life of Kimi Werner. But for someone who has accomplished so much and ascended to the top of the freediving world, you’ll never come across someone as authentic and down to earth as Kimi.

We recently held the Kaiola Gala fundraising event at the Aquarium to benefit marine life conservation through the Maui Ocean Center Marine Institute. Leading up to the event, it was clear Kimi would be the ideal keynote speaker. A homegrown hero who’s traveled the world freediving frigid Antarctic seas to assisting with research in Papahanaumokuakea National Marine Monument, Kimi embodies a genuine spirit that resonates with the people of Hawaii and beyond. 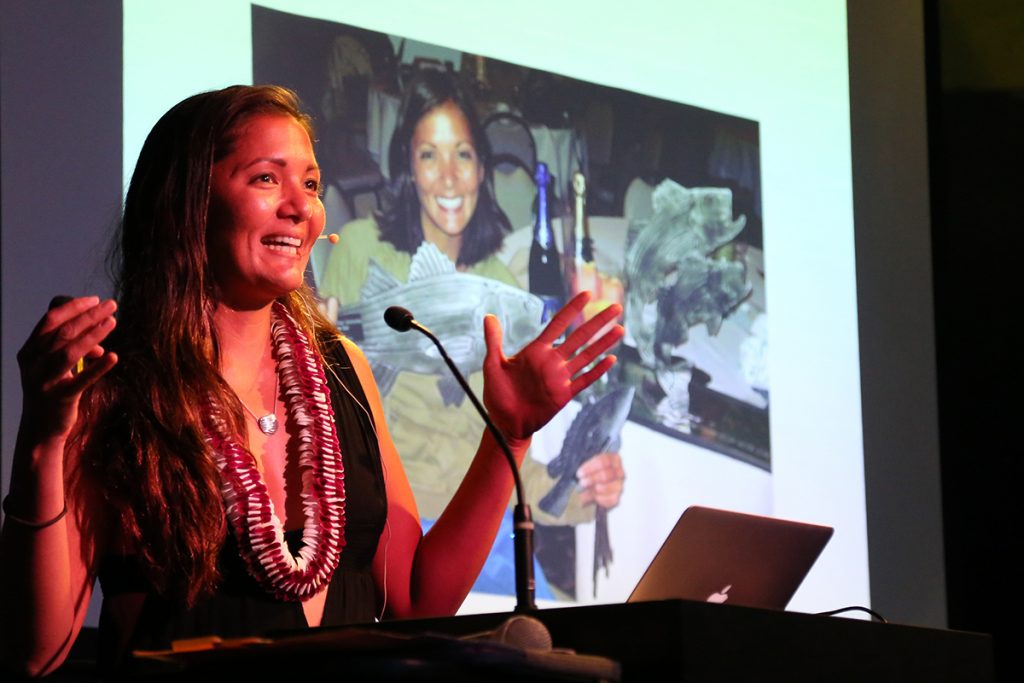 Kimi’s presentation was an inspiration to those in attendance. She spoke about her life journey, the solidarity of mankind and nature, and the meaning of conservation – it’s not about dividing or casting blame, we’re in this together as we are all members of one ecosystem.

During the evening I caught a glimpse of Kimi and her assistant Sarah peering through the porthole of the 750,000-gallon Open Ocean exhibit when it dawned on me that Kimi has never been in the exhibit. We talked story, exchanged contact info, and within 24 hours we found ourselves on the rooftop of the Open Ocean preparing Kimi for her first dive into the exhibit.

This particular dive was something special, not only because it was Kimi Werner, but it was the fact that she was going to free dive – no scuba tank or oxygen line, just one breath and one drop. Freediving rarely happens at the Aquarium, but with a seasoned diver like Kimi who can hold her breath for over four minutes, there was little to worry about. 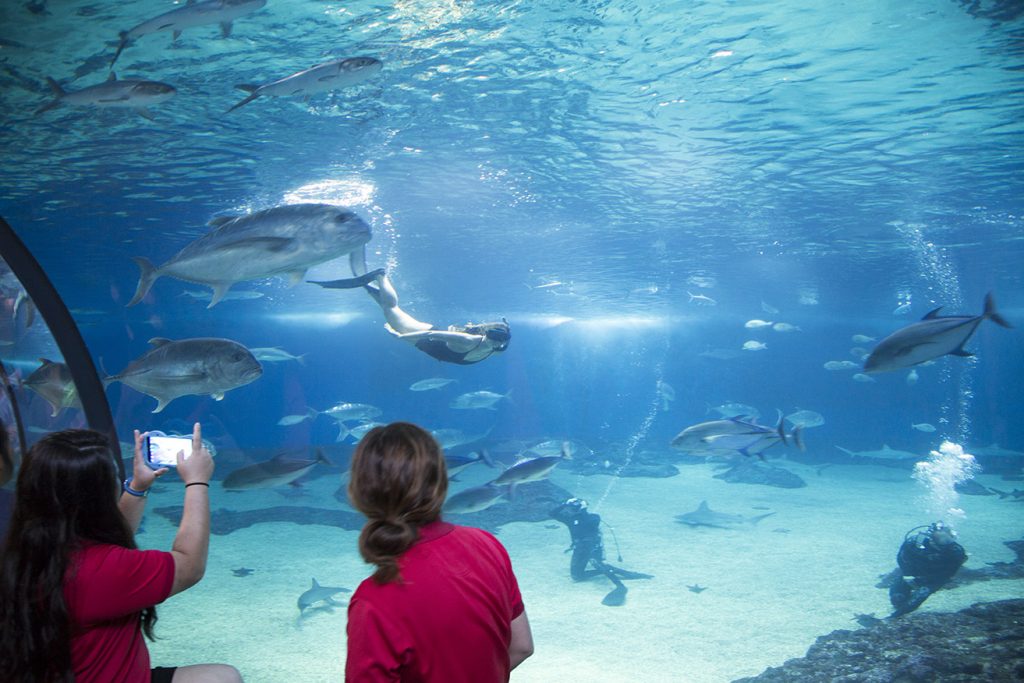 The moment Kimi broke the water’s surface a wave of excitement swept through the crowd of children in the tunnel. A roar of cheers erupted as she swam alongside the exhibit giving high fives through the glass with keiki and adults. Kids shouted “mermaids are real!” while Aquarium staff and guests scrambled to get their phones out and take photos of our special visitor. 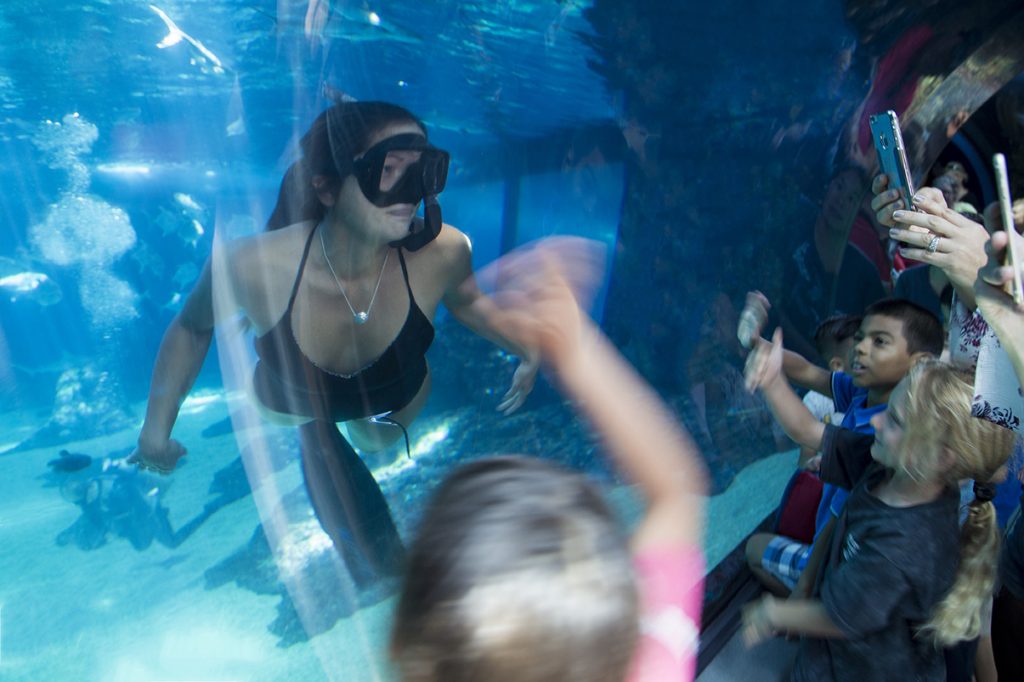 But during the frenzy, there were calm, peaceful moments between Kimi and the animals. It was the casual encounter between her and the sharks, two predators coming face-to-face with a mutual understanding and respect of their place in the ecosystem. 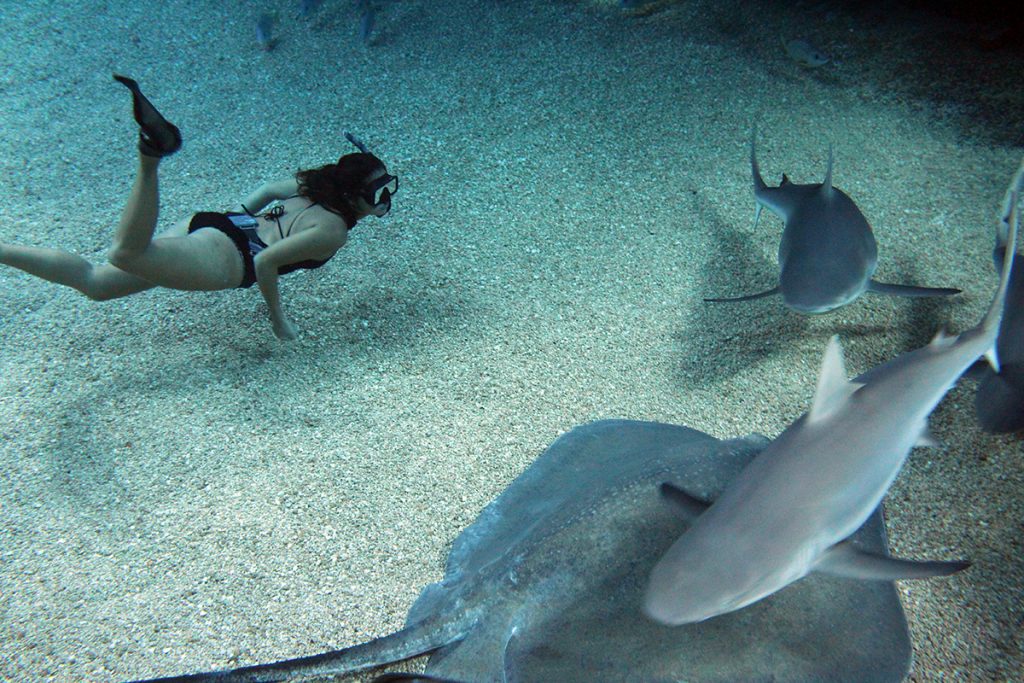 It was the graceful dance of curiosity between a stingray and human, two species from seemingly different worlds trying to recognize one another. 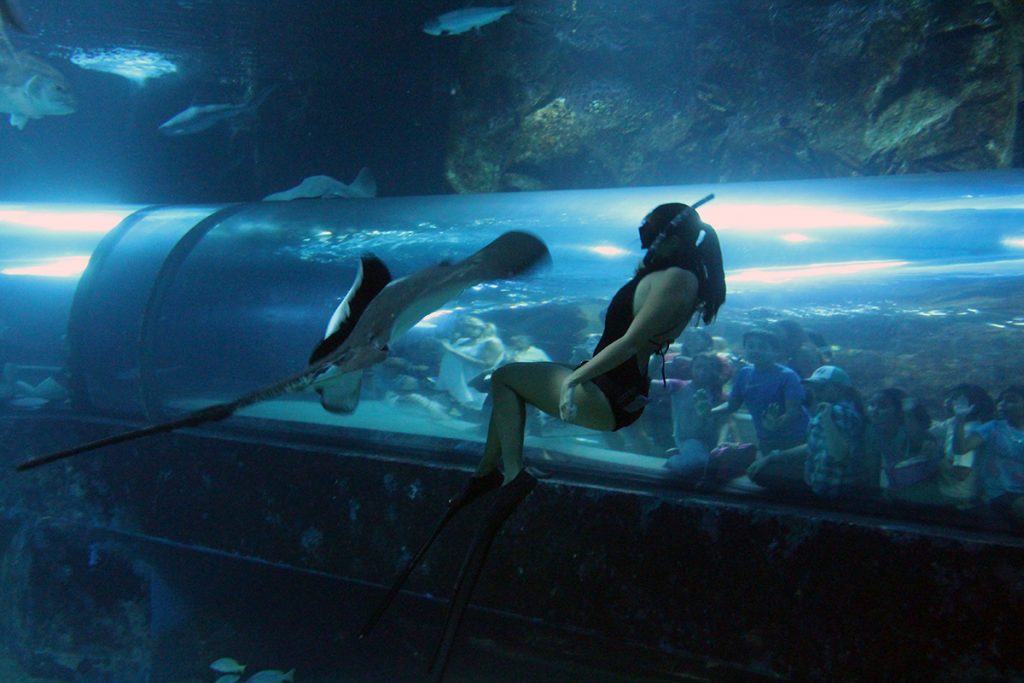 Quite simply, it was what you’d expect to witness with Kimi Werner – an authentic, natural, and genuine connection between mankind and nature. 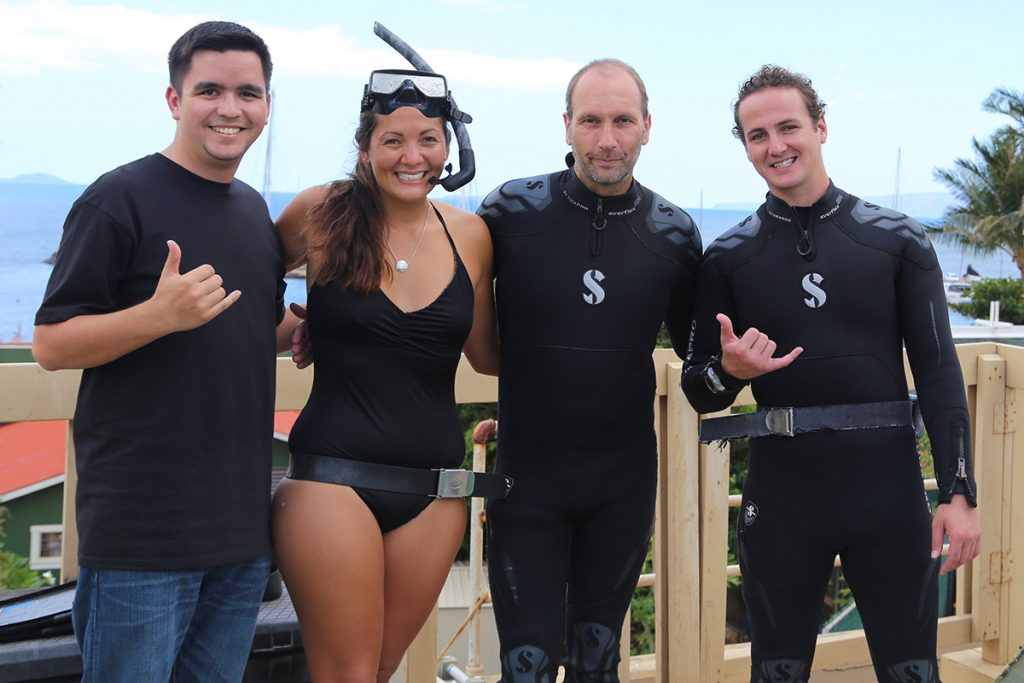 When I met Kimi at the top of the exhibit I asked her what she thought of the dive, to which she happily yet simply said, “I got my fix”. Although Kimi has traveled the world and dove in places most of us dream of, it was a great honor to host her in our very own Open Ocean. Maui Ocean Center sends its warmest aloha to Kimi and Sarah for making this a special day for our guests and employees. Follow Kimi’s adventures through social media on Instagram (@kimi_swimmy), Facebook (Kimi Werner), or online at www.kimiwerner.com.

A hui hou, until we meet again!