Leatherback Turtles are “Sea Dogs” of the Ocean

“Sea dogs” are sailors notorious for their grit, knowledge, and ocean savviness. They brave the high seas on long journeys through the harshest of oceanic environments. Sea dogs are pioneers of the blue frontier, aged with experience and a lifetime of sun and salt. When it comes to sea turtles, no other species draws a better comparison to a sea dog than the leatherback sea turtle. 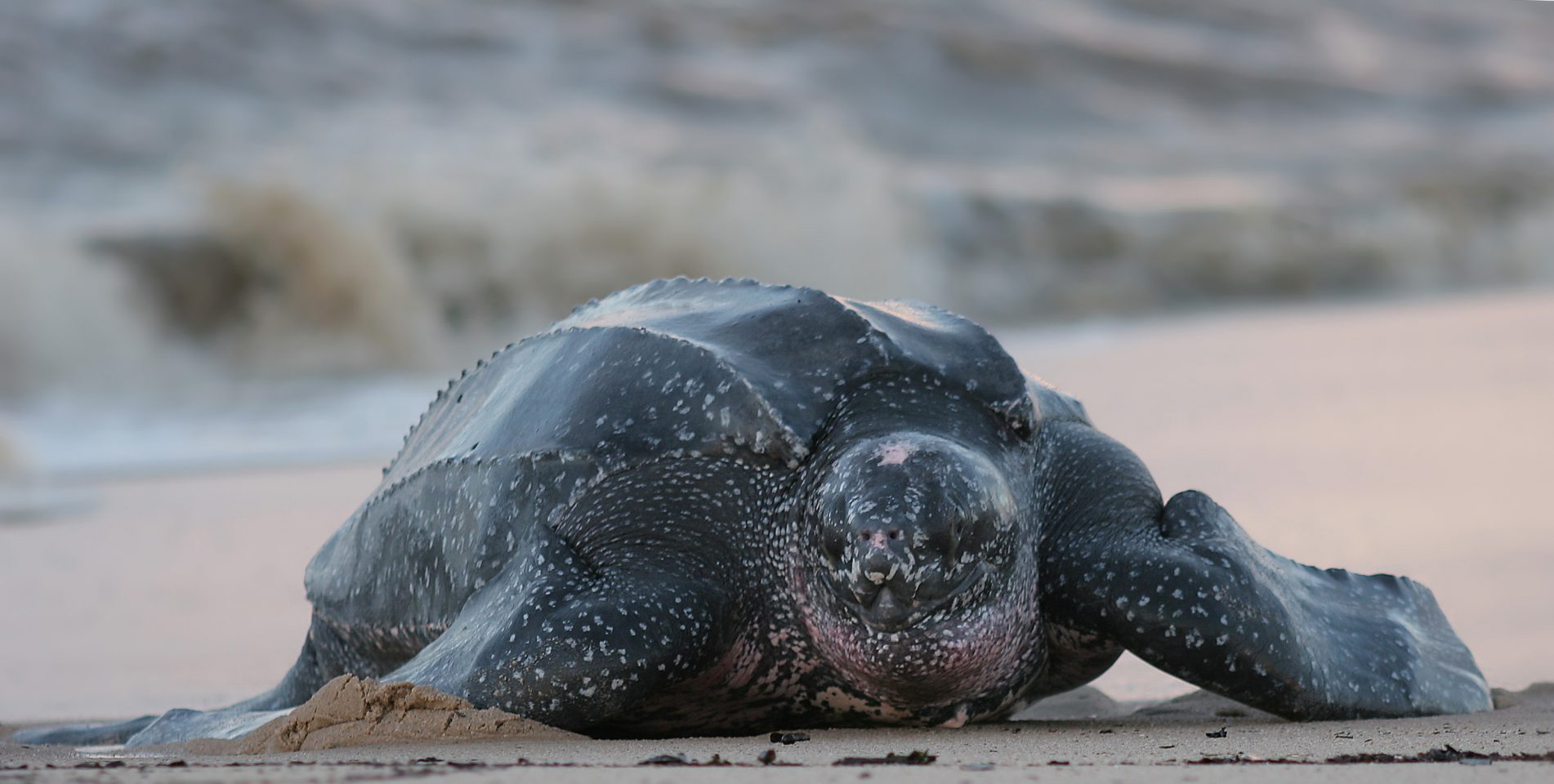 Leatherback sea turtles (Dermochelys coriacea) are renowned ocean voyagers and arguably the most unique of the seven sea turtle species. They inhabit every ocean on Earth other than the Arctic and Antarctic seas and travel great distances between coastal and pelagic habitats. Leatherbacks date back to the age of dinosaurs. Their sheer size and weathered appearance are indicative of an animal that is built for the rugged open ocean environment.

They are vastly different than the Hawaiian green and hawksbill sea turtles that we typically encounter in Hawaii. Leatherbacks are the largest turtle species in the world, attaining a carapace length of seven feet and over 2,000 pounds in weight, dwarfing the smaller 200-500 pound Hawaiian green sea turtle. While all other sea turtles have hard shells with plated-scutes, the leatherback has a flexible carapace made up of a matrix of bone and cartilage covered by blackish-blue leathery skin. Combined with powerful front flippers and seven ridges that run the length of its carapace, the leatherback is incredibly hydrodynamic and engineered to dive to extreme depths of 4,000 feet, greater than any other sea turtle and most marine mammals.

Regarded as one of the world’s most migratory animals, leatherbacks travel upwards of 10,000 miles between coastal nesting sites and foraging grounds in the open ocean every year. In comparison, the annual migration of humpback whales from Alaska to Hawaii is about 6,000 miles. Here in this pelagic realm, leatherbacks feed exclusively on soft-bodied prey like sea jellies, plankton, and salps.

Leatherbacks have been in existence for over 150 million years, but despite this great feat, their numbers have rapidly declined over the last century. The leatherback’s population status varies by region; while the Atlantic populations appear to be stable and increasing, the Pacific populations are at-risk for extinction. According to NOAA Fisheries, it is estimated that the global population has declined 40 percent over the past three generations, but for the Pacific populations, that number is closer to 90 percent. Threats to leatherbacks include food source availability, interactions with fishing gear and boat collisions, coastal development, harvesting of adult turtles and eggs by humans, and nest predation.

Did you know?
Regarded as one of the world’s most migratory animals, leatherbacks travel upwards of 10,000 miles between coastal nesting sites and foraging grounds in the open ocean every year.

In Hawaii, leatherback sea turtle sightings are very rare due to their deep water habitat, but they are indeed one of the five sea turtle species found in our waters. They are transient visitors to the Hawaiian Islands during their migration between nesting sites in Malaysia, Indonesia, Papua New Guinea, and the Solomon Islands to feeding grounds off North America’s Pacific Coast.

Leatherback sea turtles are seasoned mariners of the world’s seven seas. They are transoceanic travelers, accomplished divers, and survivors of an environment that has changed drastically over the course of millions of years. Though they are currently navigating the turbulent waters of recovery, conservation efforts from an international to community level are fighting to slow and reverse the population decline. And while many of us may never encounter leatherbacks in Hawaii’s coastal waters, they are a part of our marine ‘ohana, and one of the many marine animals that exist beyond the waves.