Their carapace (upper shell) ranges from brown with yellow and light brown streaks to black, and their plastron (bottom shell) is a light yellow. As adults, honu mainly eat algae and seagrasses, which turn their fat layer green and gives them their common name.

With lungs two-thirds as long as their carapace, it is believed they can stay underwater for many hours depending on their size. The longest recorded downtime for Hawaiian green sea turtles lasted five hours. Imagine holding your breath for that long!

Did You Know...
Though their eyesight is excellent underwater, they are reported to be nearsighted above water and on land.

This program is specifically designed as an educational outreach program geared towards education, conservation, and enhancement of the public’s awareness of the oceans and their inhabitants. The juvenile turtles at MOC hatched at SLPH on O‘ahu. SLPH is home to a colony of adult Hawaiian green sea turtles, which produce approximately 200-800 hatchlings each year, most of which are released into the wild, except for those kept at collaborating institutions to be released at a later date as juveniles.

When the juveniles reach 2-3 years, they are released into Hawaiian waters under the authority and approval of the U.S. FWS at a location approved by the agency. After releasing the juveniles to their forever home in nature, SLPH provides available new hatchlings to maintain each facility’s educational display program.

Hawaiian Green Sea Turtle Reproduction
The Hawaiian green sea turtle typically reaches sexual maturity around 20 years of age, with some turtles in a study reaching age 40 before mating for the first time. Once sexual maturity is reached, males grow long, thick tails, and female tails remain short. Females may mate every two years, and after doing so, over ninety percent will swim from the main island chain westward to the French Frigate Shoals, a distance of nearly 600 miles, to lay their eggs. According to Global Independent Sea Turtle Scientist George Balazs, this journey for a female turtle in Maui’s waters could take more than two months as they ‘island hop’ and graze on seaweed off each island along the way.

The females laboriously haul themselves out of the water upon reaching their destination and try to get as far away from the tide line as possible. They then dig a pit called a nest chamber and lay an average of 75 to 100 eggs per nest, digging as many as six nests in one season. Hawaiian green sea turtles typically lay their nests in the early summer months, and the hatchlings begin to emerge about two months later. The sex of each hatchling is determined by temperature — the cooler the sand, the more males will hatch.

Life doesn’t come easily for small sea turtles. Just the simple act of making it to the open ocean is a massive challenge for hatchlings. Sandy shorelines and shallow reefs pose a high threat, as do animals such as crabs, dogs, mongooses, and even people who may take these young hatchlings. The first few years of their lives are known as “the lost years” and are spent roaming the open ocean or pelagic zone where it is believed they search for mats of algae, seaweed, or debris for protection. These young turtles must search for food, and their omnivorous diet consists of sea jellies, crustaceans, and fish. Seabirds frequently spot them from the air, and many species of fish prey on hatchlings. The juveniles who survive these numerous challenges return to their coastal grazing areas after five to ten years, mostly grazing on seaweed (limu).

Significance in Hawaiian Culture
In old Hawaiʻi, green sea turtles were thought to be the property of the ali‘i, or chiefs. They were sometimes raised in loko i‘a, or fishponds, according to Maui Ocean Center’s Hawaiian Cultural Advisor, Kahu Dane Maxwell. The turtle meat would be eaten, the turtle’s bones used for ornaments or fishhooks, and their shells as containers. Some individuals or families did not take or consume honu and instead thought of them as family deities (ʻaumākua), worshipping and caring for them.

A Protected Species
All sea turtles are listed as endangered species in the United States, meaning it is a federal offense to harm, harass, or even touch a sea turtle. Whether the turtle is in the water or resting on a beach, any physical contact is prohibited. Current research in Hawaiʻi shows the Hawaiian green turtle population has increased since they have been protected by federal law. 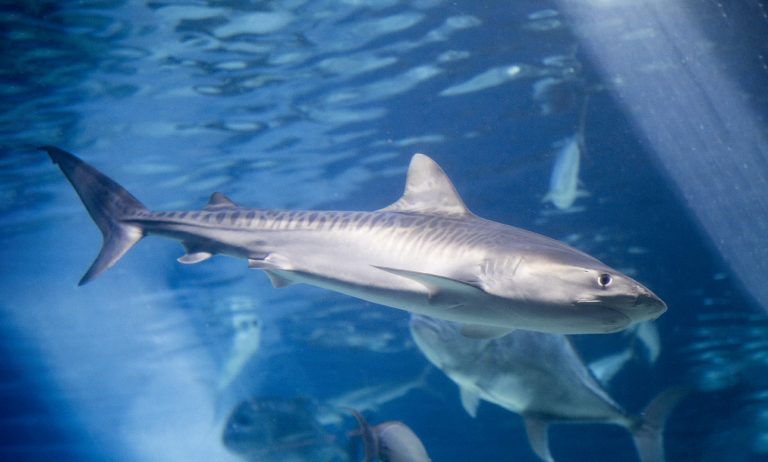 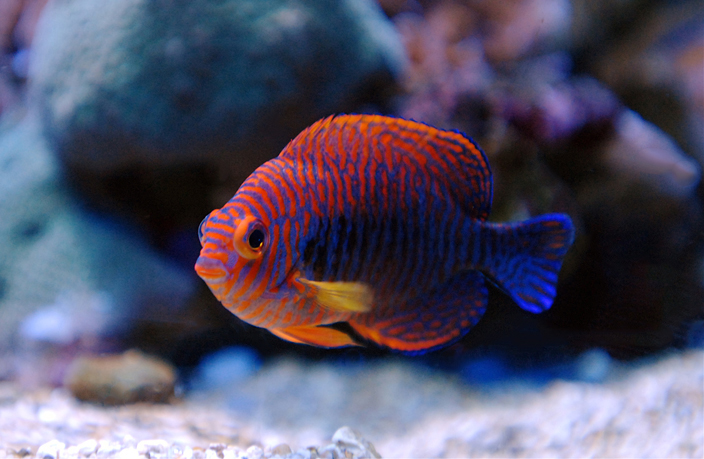 Potter’s Angelfish
Potter’s angelfish have a unique pattern, with a deep orange on its front and dorsal region, which shades to a grayish-blueish side. Its posterior has vertical lines of blue and black. Potter’s an...
Read more
Discover Maui's Marine Habitat
Exhibits
Open Ocean
Take a stroll through the 35-foot long acrylic tunnel as sharks soar above your head. Watch elegant stingrays turn backflips in our 750,000-gallon Open Ocean tank—a sli...
Read more