Friday, August 31, 2018, MA‘ALAEA, MAUI , HI – On Thursday, August 30, 2018, two Hawaiian green sea turtles were released into Maui’s coastal waters where they will continue their life in their natural habitat. These honu (turtles) were hatched at Sea Life Park Hawaii in 2016 and raised at Maui Ocean Center as ambassadors of their species, educating guests about Hawaii’s sea turtles and the challenges they face in the wild.

It was cheers and smiles for guests aboard the Ali‘i Nui catamaran as Kekoa (Turtle C) and Kanoa (Turtle D) were carried down the boat’s steps into the welcoming waters of Maui. For Maui Ocean Center’s curators, who have fed, cleaned, and cared for the honu over the past two years, it was a bittersweet moment as they bid farewell to the turtles. Since establishing its partnership with Sea Life Park Hawaii in 1998, Maui Ocean Center has raised and released 74 Hawaiian green sea turtles. 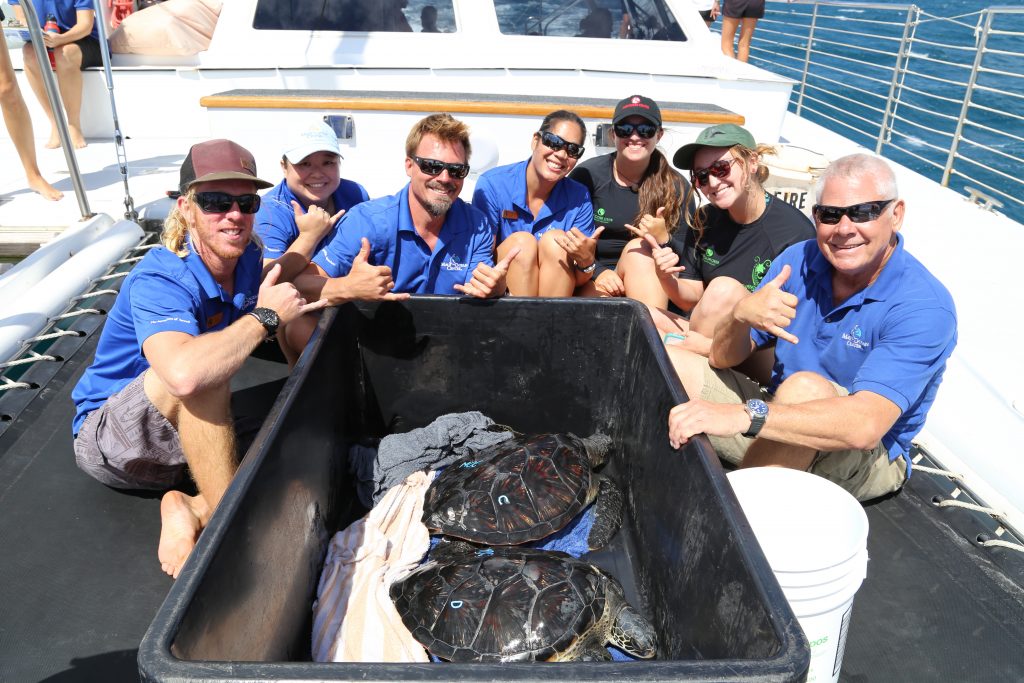 Both turtles were released with Passive Integrated Transponder (PIT) Tags as well as “MOC” and a letter marked on their shell for identification purposes. Maui Ocean Center encourages the public to keep an eye out for these turtles. If a sighting is made, please report the date, time, ID letter, and location to Maui Ocean Center at (808) 270-7075, info@mauioceancenter.com, or social media.

Maui Ocean Center currently has four, two-year-old sea turtles under its care with more on the way. The Aquarium anticipates the arrival of six sea turtle hatchlings in the coming weeks which will eventually be exhibited at Maui Ocean Center’s Turtle Lagoon. All turtles are provided by Sea Life Park Hawaii through the Hawaiian Green Sea Turtle Educational Loan Program.

All sea turtles were handled by Maui Ocean Center staff.