The silence of the open sea is shattered by a flash of green and gold. Racing against time through the vast openness of the Pacific, a mahimahi flees from the haunting screeches that trail it. Scanning the horizon for a place of refuge, shadowy figures begin to emerge, the vocalizations intensify, and suddenly the mahimahi finds itself encircled by a group of one of Hawaii’s most advanced predators. 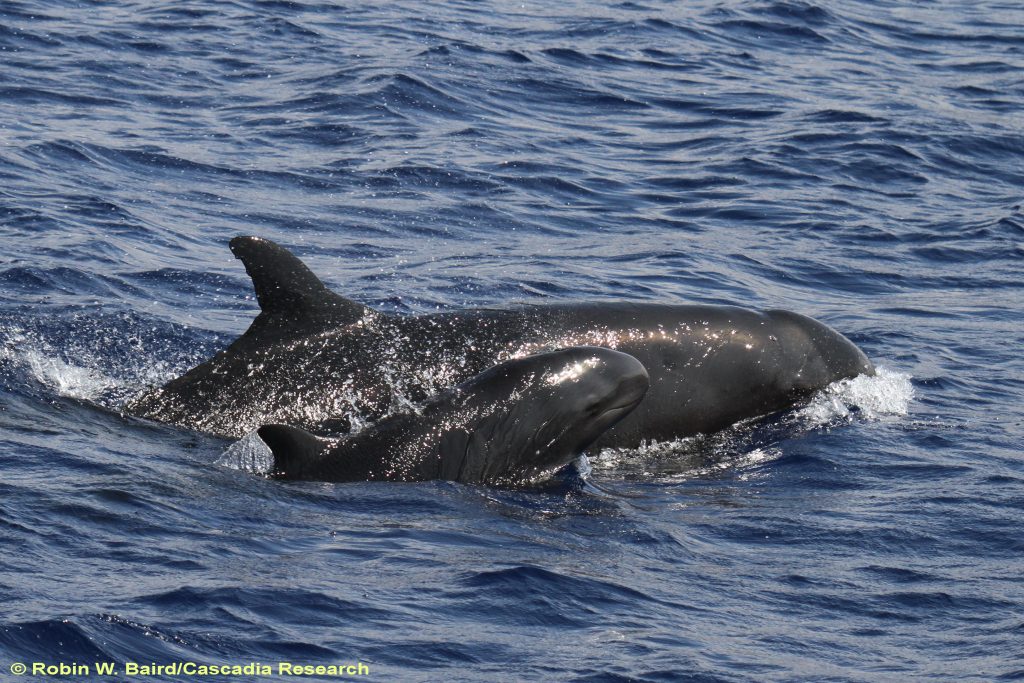 A mother false killer whale swimming with her calf.

The false killer whale’s common name is deceiving as it looks nothing like the true killer whale, Orcinus orca. It is dark grey in color, has a long, slender body, and grows up to about 14-17 feet in length. Its common name is derived from similarities between the two species’ skull and teeth rather than external appearance. False killer whales, like killer whales, are members of the family Delphinidae and are technically dolphins. Whales are divided into two groups: baleen whales (Mysticeti), such as humpbacks, and toothed whales (Odontoceti) which include beaked whales, sperm whales, dolphins, and porpoises. There’s a popular rule of thumb to remember, “All dolphins are whales, but not all whales are dolphins.” 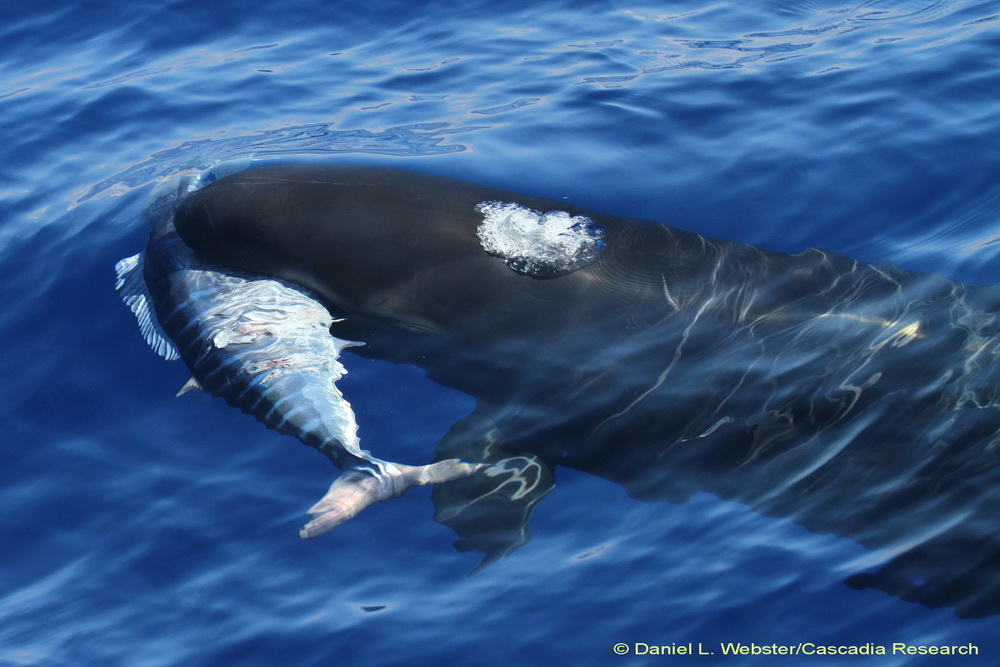 According to Cascadia Research Collective, a non-profit research organization, false killer whales are socially advanced beings. They have a lifespan of up to 60 years, form long-lasting bonds, and have peacefully associated with other delphinids including bottlenose and rough-toothed dolphins. Groups range from 5-25 whales which break off into smaller groups to hunt. False killer whales cooperatively hunt for large prey including mahimahi, ahi, ono, aku, monchong, and other pelagic species. False killer whales are known to share their captured prey with each other, and on some occasions, have even offered their catch to boaters and divers.

False killer whales are inquisitive and commonly exhibit positive behavior towards humans. Unfortunately, the same cannot be said for the human impacts on false killer whale populations. Whale hunting continues in Japan, Indonesia, and the West Indies. In offshore waters in Hawaii, accidental bycatch and interactions with longline fishing gear, as well as entanglement with derelict fishing equipment, can lead to fatal injuries. The accumulation of toxic PCB and DDE chemicals found in false killer whales, a result of ingesting prey that have accumulated these toxins, is negatively impacting their reproductive capabilities and cause immune system problems. 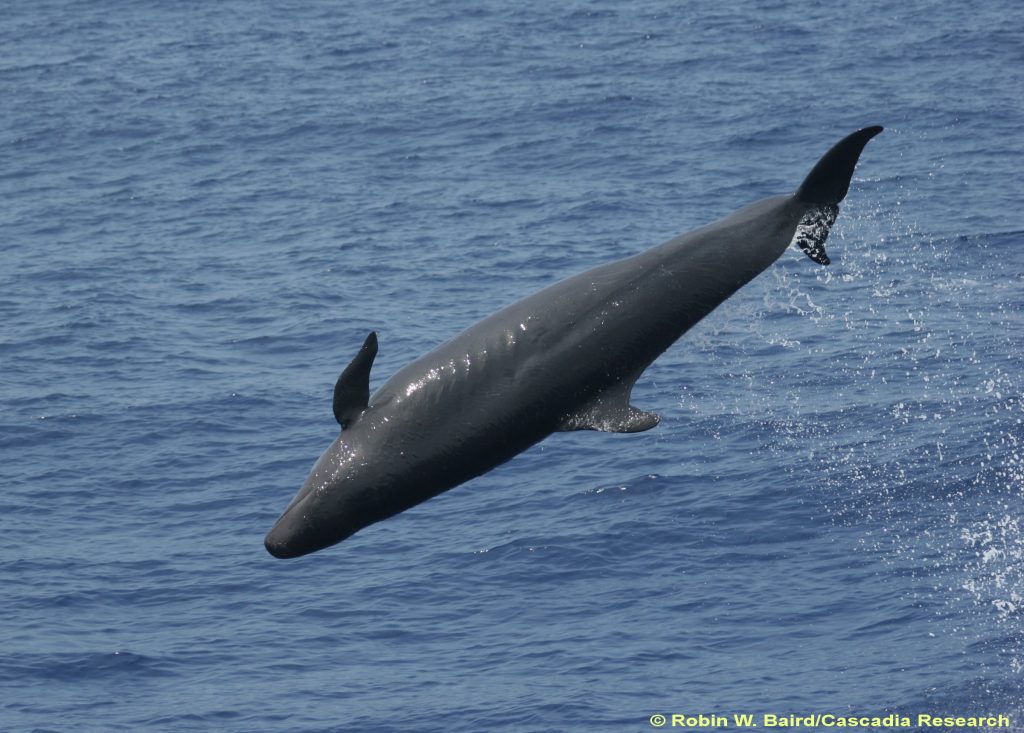 A false killer whale leaps through the air in pursuit of its prey.

The endangered Main Hawaiian Islands population is estimated to be only 150-200 individuals. Conservation efforts including a NOAA-established Take Reduction Team (2010) and Take Reduction Plan (2012), ongoing research, and efforts to mitigate land-based pollution are several strategies being implemented to protect this vulnerable species. 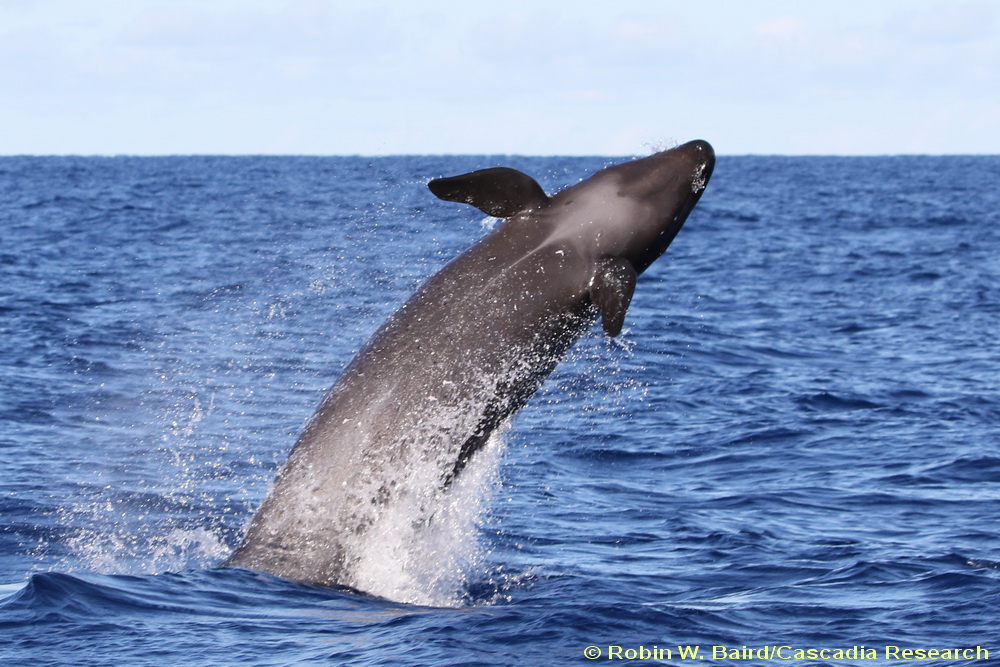 More is known about Pseudorca in Hawaiian waters than anywhere else in the world.

As we enter peak humpback whale watching season, please remember that our ocean is home to many other whale and dolphin species. Humpback whales will eventually return to Alaska, but for the Main Hawaiian Islands false killer whales that do not migrate to distant seas, Hawaii is their home year-round. They are residents of these islands, true kama‘aina which warrant our admiration, respect, and care. Individual lifestyle changes and support of non-profit organizations and government agencies are just a few ways we can increase the chances for the false killer whale to become the next success story in marine mammal conservation.