Imagine you are a small shrimp scooting along the shallow sandy bottom when you’re suddenly faced with a broad mouthful of needle-sharp teeth, surrounded by what appears to be a nightmarish flame orange grin! You have just run into one of the 15 species of lizardfishes (‘ulae in Hawaiian) known to inhabit Hawaiian waters. This animal, the orangemouth lizardfish (Saurida flamma), displays coloration on its lips and jaws that accentuates the more intimidating feature of this particular family of fish – their teeth. The genus name of many lizardfishes in Hawai‘i (Synodus) even focuses on this prominent attribute. In Greek, the etymology “Syn” means altogether or united, and “odous” means teeth. This translates to “teeth all together”…a fitting description. 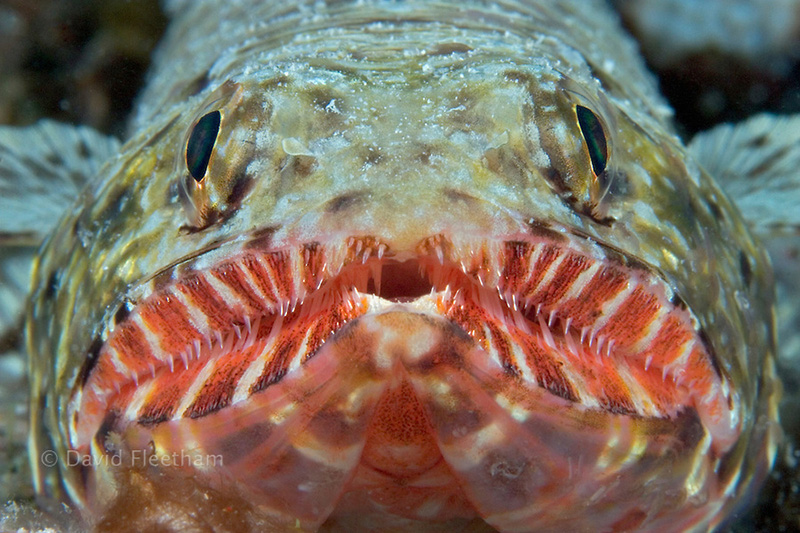 The orangemouth lizardfish, or ‘ulae, sports a broad mouth full of needle-sharp teeth and reaches up to 12 inches in length. Photo by ©www.davidfleetham.com

The good news is that while the lizardfish might be terrifying or even lethal for a smaller reef critter, this ambush predator poses no threat to humans since the largest species in Hawai‘i might only reach 12 inches in length. Lizardfishes can even be somewhat of a nuisance to fishermen as these feisty little fish often latch on to jigs or grub lures when deep water fishing or casting from shore. They have been known to go for bait that is at least half their size! Divers often see these fish resting on the rippled sandy bottom, perched on their pelvic fins. Some will wiggle their way under the sand with their crocodile-like eyes poking out. A lizardfish will sit motionless relying on camouflage to hide and once a tasty morsel, perhaps a small squid or fish, haphazardly comes within reach, it acts with lightning speed to strike. It clamps down on its prey with a wide mouth and plethora of teeth. This fish is so well equipped for catching a meal that it even has teeth on its tongue!

The lizardfish is primarily a solitary animal but when it is time for mating, the Hawaiian lizardfish male (Synodus ulae) will often chase multiple females throughout the day, flaring its gill covers and fighting other males that try to court the same female. After a flurry of activity, a male and female will finally pair up and sit next to each other on the bottom. Late in the day toward dusk, the two quickly swim upward releasing gametes, sperm and eggs, into the water forming a large cloud, which will then blend, resulting in fertilization. This process is known as broadcast spawning. After it is over, the two will split once again taking up their places on the bottom to wait for the next victim to swim by.

The lizardfish is not currently on exhibit at Maui Ocean Center, but are plentiful in Maui waters and are often fun to find! Test your vision and see if you can spot one of these creepy creatures on your next dive. Easily approachable by divers, the lizardfish is confident in its camouflage, and will lay motionless when confronted. But be warned, get too close and the lizardfish will launch off the bottom and disappear in a flash!