The shallow sea reflects only the stars from the dark moonless sky. The surface is glassy with the gentle ebb and flow of the low tide. The fish are motionless in a trance by the soft glow of an approaching light. As the orb grows larger, the ground vibrates and an unexpected splash startles the fish, causing a panicked scatter as they slip away into the darkness. 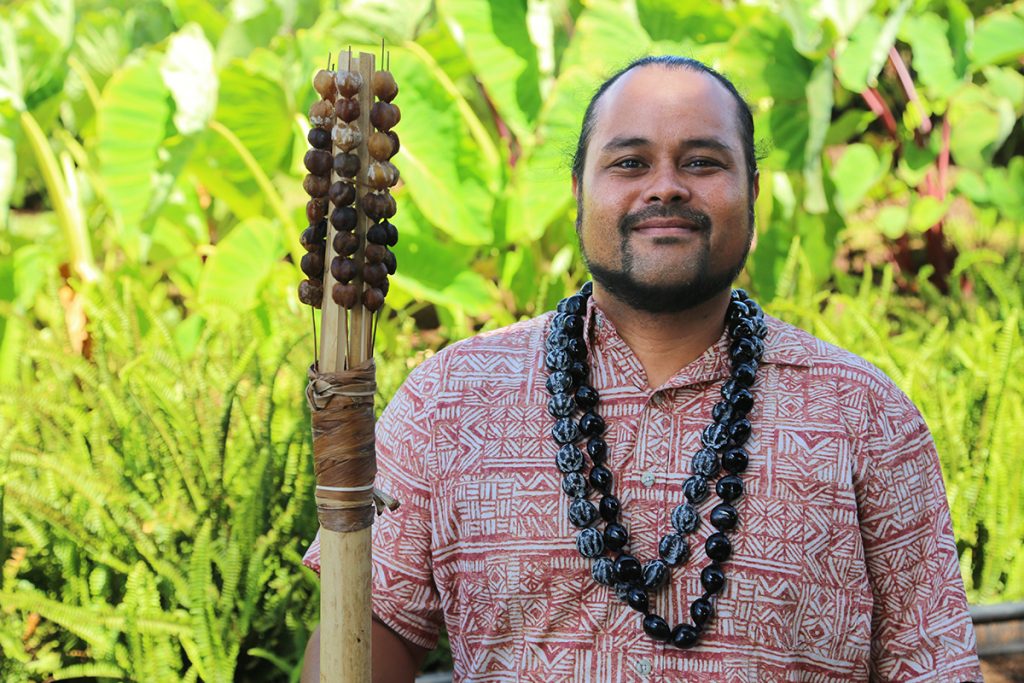 This is a scene well known by anyone who has ever gone torch fishing. Better known as lamalama fishing in Hawai‘i, torch fishermen often hunted in pairs along shallow reefs during dark nights, wading with the lightest step to avoid announcing their presence. Holding a scoop net or wooden spear, they both carried a torch to illuminate their surroundings and induce nearby fish into a hypnotic-state which could be broken at any moment if the fishermen made too much commotion.

Some believed that the success of lamalama fishing also depended on the intensity of the torch’s flame. The secret to creating a bright flame was held within one of Hawai‘i’s most versatile resources – the kukui nut.

The kukui nut, or candlenut, is one of nature’s engineering marvels used by Hawaiians for centuries. Introduced by Polynesian settlers, the kukui nut tree is held in high regard for its usefulness ranging from food to medicinal applications. The kukui nut is aptly named for its oil that can be ignited and burned for a duration of time, and thus, kukui is often associated with enlightenment. 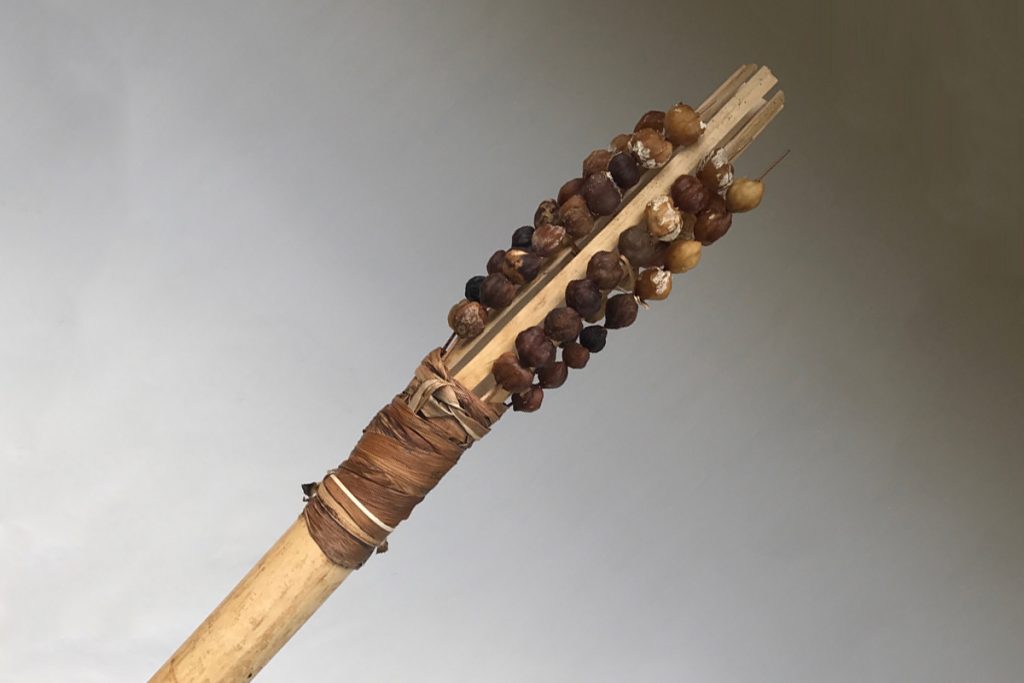 Hawai‘i’s fishermen had many uses for the kukui nut. The lamalama torch was made by stringing together dried kukui nut meat and securing it to split bamboo. Once lit, a single kukui nut would burn for five to eight minutes while the hot oil trickled down and ignited the next nut. These clusters were secured with ki leaves to fashion a torch that could last throughout the night. Kukui nut strings were also used on land as a way of tracking time or marking specific landmarks.

Kukui nuts also benefited fishermen during the day. Those fishing from shore or canoe could improve visibility through the water by chewing the kukui nut and spitting the oily mix onto the ocean surface. Bait sticks used to attract smaller fish were made from heavy wood, like kauila (buckthorn tree), that were charred by fire, rubbed with kukui nut or coconut oil, and smeared with bait. The bark of the kukui nut tree also produced a natural dye used by net fishermen to make their nets a reddish-brown color. 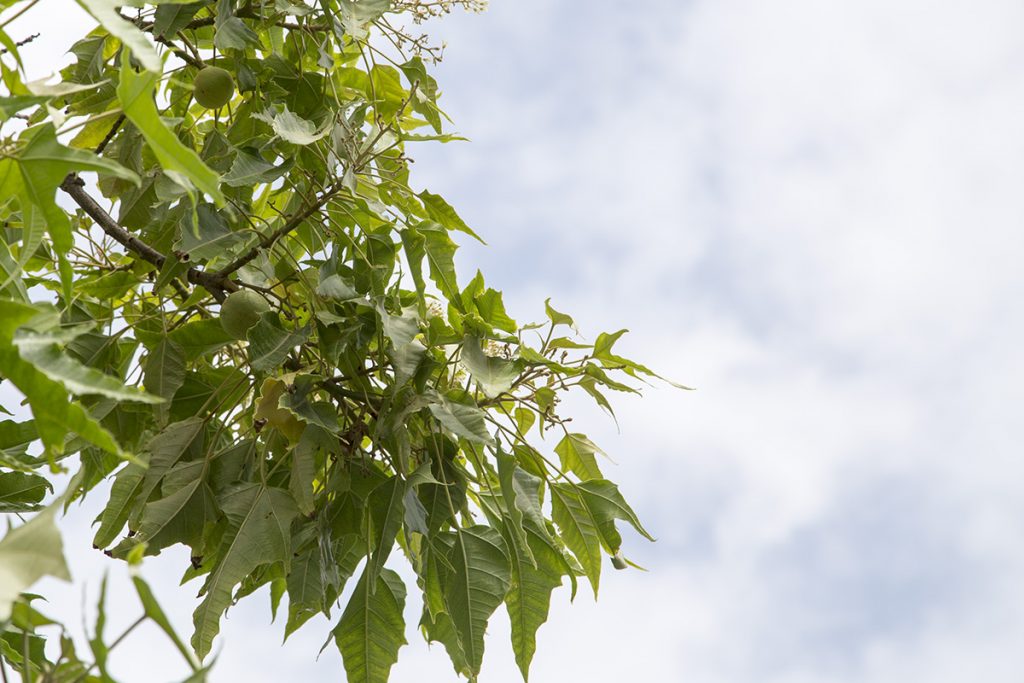 The kukui nut also played a role at home. The nut’s meat was roasted and grounded with sea salt to make ‘inamona, a relish that paired well with raw fish or poke (cubed raw fish). The sap from young kukui nuts was also used to help treat thrush in young infants and toddlers. Those dealing with stomach issues would find relief by eating raw kukui nuts as a laxative, or what some call the “1, 2, 3 nut” – eat one and you’re walking to the bathroom, eat two and you’re running, eat a third… well, you might not make it.

In 1959 the kukui nut tree was declared the State of Hawai‘i’s official tree. The kukui nut continues to see widespread use today in both traditional and commercial uses from personal care products to leis worn at special gatherings. The story of the kukui nut is one of many living examples of early Hawaiian resourcefulness and their ability to harness numerous uses from a single plant.

Many of Hawai‘i’s plants have special connections with local marine life and Hawaiian traditions. Learn more of the history and uses of Hawai‘i’s plants with Maui Ocean Center’s free Culture and Native Plant Guided Walk. Tour the park’s renewed landscape featuring native Hawaiian and Polynesian plants with a cultural practitioner to discover the unique connection between Hawai‘i’s land, sea, and people. Visit mauioceancenter.com/explore for more info.