Maui Ocean Center respectfully complies with the County of Maui ordinance prohibiting the exhibit of cetaceans (marine mammals including whales, dolphins, and monk seals), and instead provide opportunities to learn about these animals through interpretive displays in the Humpbacks of Hawaiʻi Exhibit, naturalist presentations, and volunteers from organizations in Maui’s community.

Each year humpback whales visit the Hawaiian Islands during the winter months, arriving sometime in November and departing in March. While in Hawaiʻi’s waters, humpbacks don’t feed, as the primary reason for their journey is to mate and for mother whales to give birth and raise their young. Their epic voyage from Alaska to Hawaii spans approximately 3,000 miles and is one of the longest journeys taken by any land or sea animal.

Humpback whales are an endangered species, and overall populations drastically declined before their placement on the endangered species list. An increase in their population has been documented, although it is difficult to estimate an exact count of this species.

Humpback whales weigh between 25-40 tons and can reach up to 45 feet in length, and females tend to be larger than males. Most humpbacks present a dark grey coloring, while some individuals have a variable amount of white on their pectoral fins and bellies. These distinctive characteristics are used in many instances used to identify individual whales.

Feeding for humpback whales occurs in the North Pacific during the summer months, where their main priority is to build up fat stores (blubber) to live off of during their winters without food in Hawaiʻi. Humpback whales filter feed on tiny crustaceans (mainly krill and small fish) and consume up to 3,000 pounds of food per day. Adults have been known to hold their breath for up to 45 minutes, where calves must surface for air every few minutes.

Did You Know...
Roughly 10,000 whales make their journey from the North Pacific to the warm waters of the Hawaiian Islands.

During the winter months, mating is frequently observed in the Hawaiian Islands. Humpbacks are generally polygynous, meaning that one male mates with more than one female while each female mates with only one male, and competitive, aggressive behavior can observed with males on the wintering grounds. These behaviors include chasing, vocal and bubble displays, horizontal tail thrashing, and rear body thrashing. Males also sing complex songs that can last up to 20 minutes and be heard underwater from miles away. Whale singing has been studied for decades, but the specific function of their song is not yet understood.

Gestation for females lasts about 11 months, and the newborns are anywhere from 13-16 feet long. Their mother’s highly nutritious and fat-dense milk allows calves to grow quickly, and weaning occurs 6-10 months after birth. In the Hawaiian Islands, it’s common to see a mother swimming near her calf to protect her young. Beautiful aerial displays are also commonly seen, especially by calves.

Although the humpback population is making a healthy recovery, challenges and threats still affect this species. In 1997, the US and Hawaiʻi governments designated the Hawaiian Islands Humpback Whale National Marine Sanctuary to protect humpback whales and their habitat within the sanctuary and raise awareness and educate about the importance of these animals.

To Hawaiians, the whale is a representation of the Hawaiian god, Kanaloa — the god of animals in the ocean.

Hawaiian Name:
Koholā
Scientific Name:
Megaptera novaengliae
Where to Find:
Humpbacks of Hawaii Exhibit & Sphere
Share with friends
Next Up 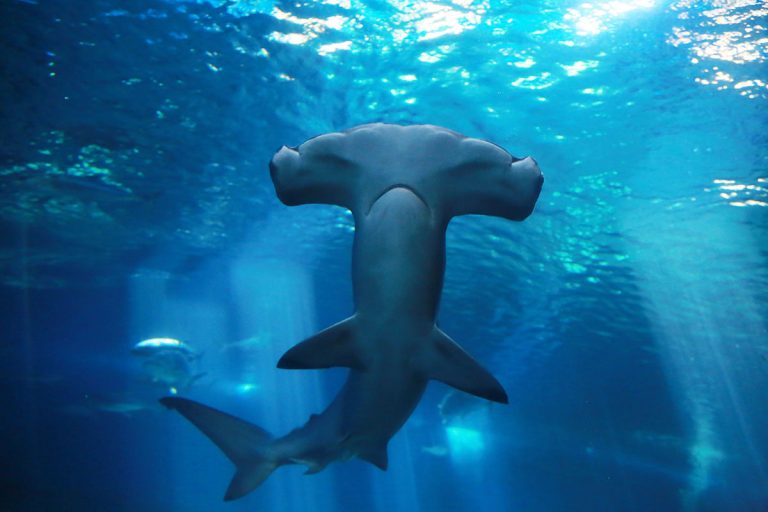 Scalloped Hammerhead Shark
Found both in coastal and pelagic regions in all oceans of the world, the hammerhead shark is by far one of the most unique and distinct sharks in our oceans today. The scalloped species has four lobe...
Read more 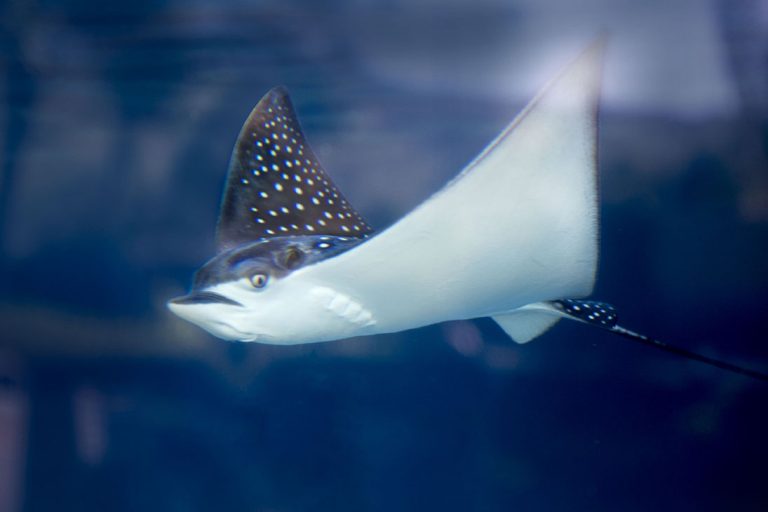