Maui Ocean Center Marine Institute (MOCMI) coordinates the response and rescue of sick, injured, and distressed sea turtles on the island of Maui in partnership and collaboration with NOAA Fisheries.

MOCMI’s Stranding Response & Rescue Team received a call just before dawn on Sunday, March 31st. The caller reported that there was at least one sea turtle entangled in a net in the nearshore waters of Kihei. Sea turtles are air-breathing reptiles and must surface to breathe. When they become caught underwater in nets or entangled in other debris, they will drown if unable to surface for air. Although a resting sea turtle can remain underwater for several hours, a sea turtle under stress will quickly use up the oxygen stored in its body and may drown within minutes. Fortunately, our team was in the area and able to arrive at the scene shortly after receiving the call.

Upon arrival to the beach, MOCMI’s responders found a 125 ft. lay gill net in the nearshore waters adjacent to Kalepolepo Park in North Kihei. Lay gill nets can potentially damage critical habitat and entangle nearly any marine animal swimming by, including sea turtles. Lay gill nets are illegal to use within three miles of shoreline around the entire island of Maui. Throughout the state, unregulated and unmonitored lay gill nets pose a substantial threat to marine bycatch. 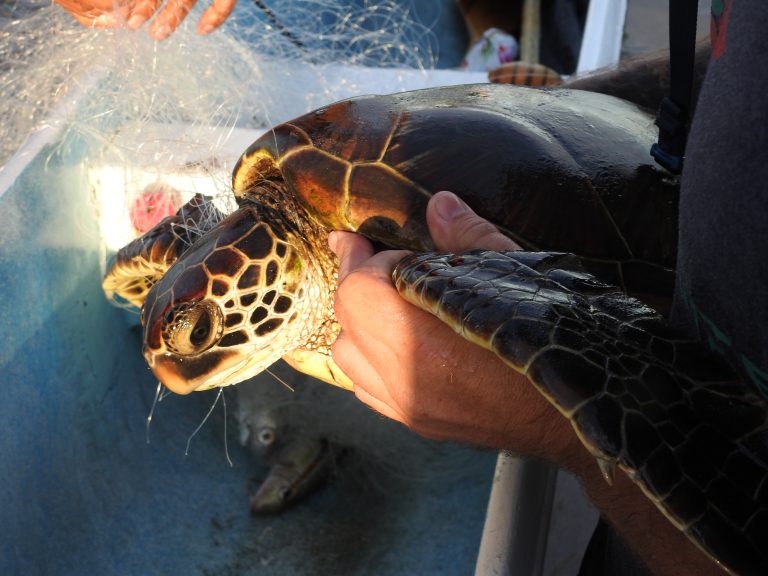 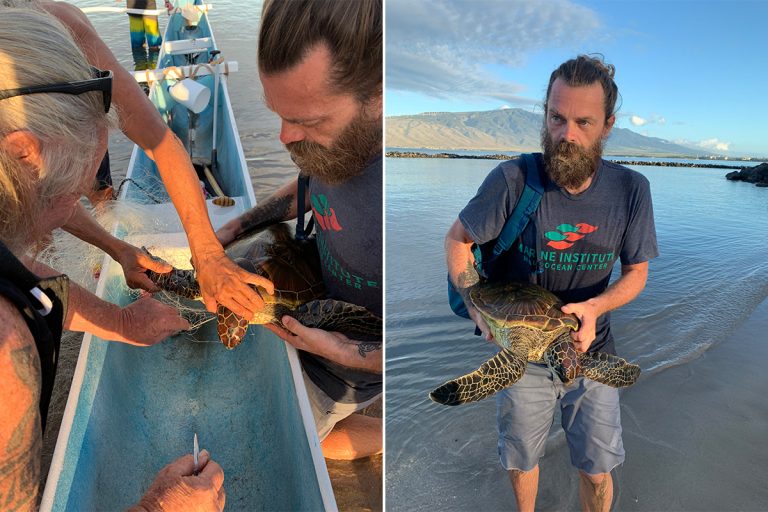 With the help of a local canoe group, affectionately known as “The Turtles,” MOCMI’s Turtle Rescue Team entered the water and began pulling the net to shore releasing multiple entangled fish along the way. Almost immediately after beginning to remove the net, the team came across the first entangled sea turtle, a small female adult Hawaiian green sea turtle. Unfortunately, the turtle was most likely caught in the net for several hours and had already drowned.

The team had just finished loading the deceased turtle into the canoe when one of the paddlers spotted another entangled turtle – this one was a small, juvenile green turtle and still alive. They quickly cut the net away and placed the entangled turtle in the canoe where it could be brought to shore for the team to assess its injuries and remove the remaining pieces of netting.

Once on shore, MOCMI biologists with the help of the paddlers, cut away the remaining netting from the turtle and assessed its condition. The turtle was found to be healthy and was immediately released back into the ocean where she swam away normally.

Unintentional interactions in nearshore fisheries, such as entanglements and hookings, are one of the most significant threats to sea turtles and a leading cause of sea turtle strandings in the Hawaiian Islands. However, together we can make a difference and help to reduce the threat caused by accidental interactions.

Contact MOCMI’s Sea Turtle Rescue Team
If you come across an entangled, sick, or injured sea turtle on Maui whether on land or underwater, call MOCMI’s Sea Turtle Stranding Response Team through the Statewide Marine Animal Response Hotline at 888-256-9840.

Recycle Old Fishing Line
If you fish, retrieve and recycle old fishing line and place in one of MOCMI’s Fishing Line Recycling Bins.