Typically when we talk about the marine life under our care, we’re referring to the marine life at Maui Ocean Center, but not always. Our mission extends to all of Hawaiʻi’s marine life—both at MOC and beyond. This past Wednesday, the all-encompassing kuleana, or responsibility, felt by Maui Ocean Center and MOC Marine Institute staff was heroically displayed as they risked life and limb (quite literally) to rescue two stranded Whitetip Reef Sharks on Maui’s North Shore. 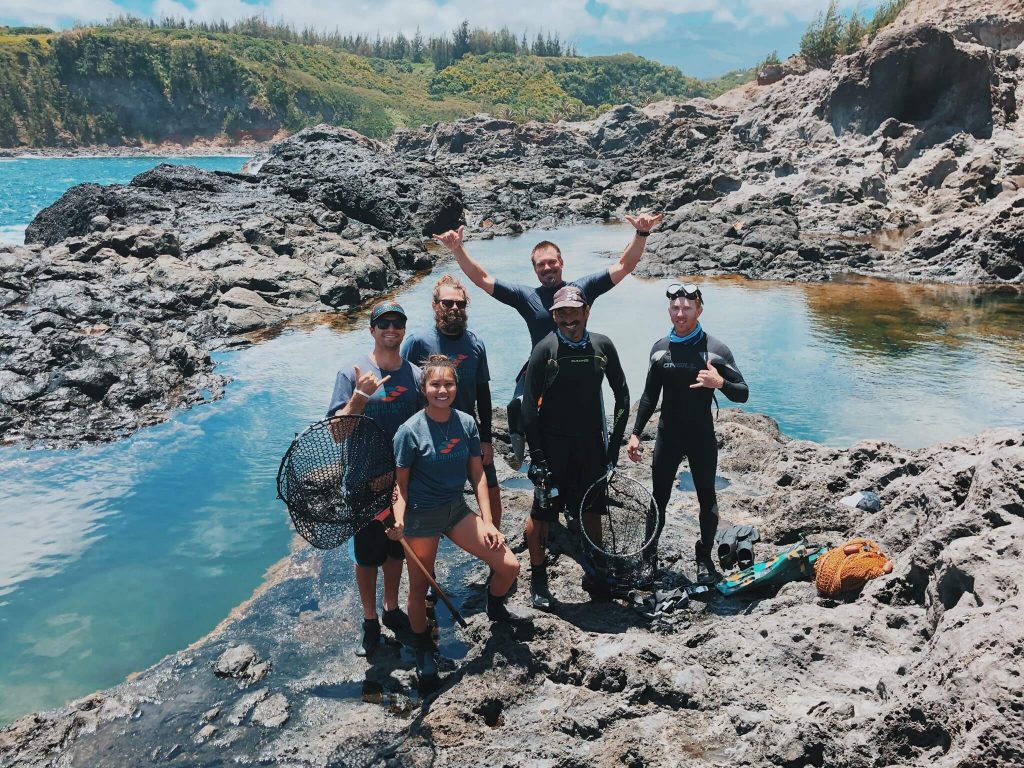 Late Tuesday night, Tommy Cutt, MOC Marine Institute’s Executive Director, received a call from a concerned resident who’d noticed two sharks stranded in a tide pool on the North Shore by Haiku. Almost a week had passed since the caller had first noticed the pair, and they believed the sharks were trapped without access back to the ocean.

Cutt enlisted the help of Jim Luecke, Maui Ocean Center’s Curatorial Director, knowing his expertise would be essential if they were to complete a successful rescue. “It brought a big flashback,” Luecke says when discussing his initial reaction in getting the news. “The exact same thing happened 18 years ago.”

There have been numerous reports of sharks stranded in tide pools along this stretch of rocky coastline. Known for being a popular fishing area, it is believed that fishermen unintentionally catch sharks and abandon them in the pools. Due to large swells that batter the rough ledges, releasing an animal safely into the ocean poses a real threat. Serious injuries and reports of people being swept away are not uncommon. The large tide pools, often 8 to 10 feet deep, present a safer way to discard an unwanted catch.

Luecke was concerned for the sharks’ health in the oxygen-deprived pool and initially considered transporting them back to Maui Ocean Center for rehabilitation. His knowledge of the area, however, made him cautious. “You have to hike down a cliff,” he says. “It’s rugged, dangerous cliffside. You can’t bring the sharks up.” Cutt and Luecke decided that the only realistic course of action available to them would be to release the sharks directly back to the ocean while onsite.

Once they’d determined the plan, they knew they’d need an experienced team in order to pull it off. One small mistake, just one missed step, could prove fatal. Only by working together would the sharks, and the crew, see the day through. 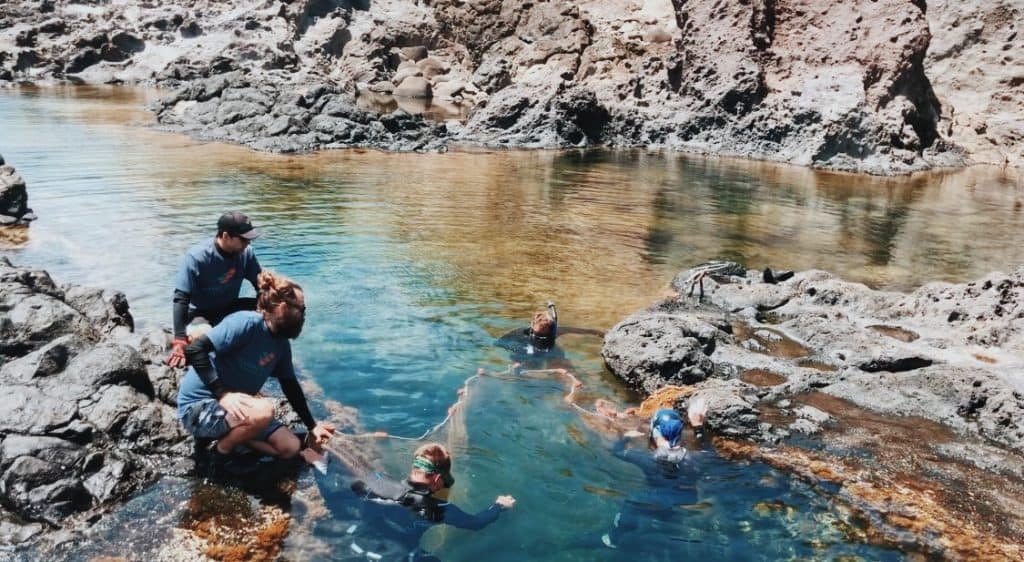 With Maui Ocean Center’s Curatorial team already split into two squads (Team Manō and Team Honu) in response to COVID-19, there wouldn’t be any hands to spare from the group in rotation at the Aquarium. Since that responsibility was currently with Team Manō, Luecke brought Paul and Josh of Team Honu on board for the rescue. Cutt recruited Aleysa and Dustin of MOC Marine Institute to make a total crew of six. Equipped with wetsuits, boots, fins, weight belts, scoop nets, and a barrier net, the group set out.

They were guided to the remote location through a gate and past sugarcane fields. The two sharks were quickly located and identified as Whitetip Reef Sharks (manō lālā kea). Observation indicated that they were adolescents, 4 to 5 feet in length, and about 4 to 5 years old. The larger of the two had clearly visible hook wounds in its mouth and on its side, indicating that it had, in fact, been caught by a fisherman before being discarded. Besides the hook wounds, they both appeared to be healthy as they rested on the bottom of the pool, a behavior unique to their species.

Through some luck, the tide pool was shaped like a teardrop—its narrow end the ideal width for setting up the barrier net for a rescue. With the net securely situated, the Maui Ocean Center crew planned to funnel the sharks towards it from the broader end, while the MOC Marine Institute crew stayed on the surface to watch the net, steady the team, and help time the release with the swells. The plan was simple, but the elements were proving unpredictable. During a dry run to determine their footing among the uneven ledges, a large swell crashed overhead, reminding them just how precarious their situation was. They would have to be quick, well-timed, and extremely careful. 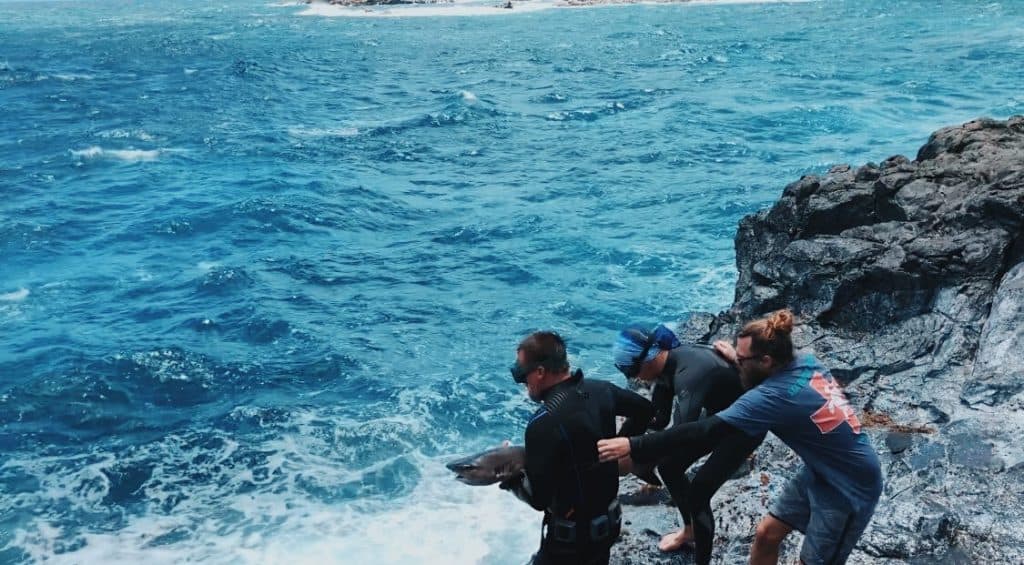 Almost immediately after Luecke and his crew entered the pool, the larger shark swam into the barrier net where it was quickly caught and carried to the ocean. With the first release complete, the team went back for the second. “The second shark was smarter and hid behind a giant boulder,” Luecke says. “It took three or four tries to get him out.” Eventually it swam to the barrier net like the first. After a harrowing moment with a swell coming in as they approached the surf, both sharks were safely returned to the ocean—all within 10 minutes of placing the barrier net. 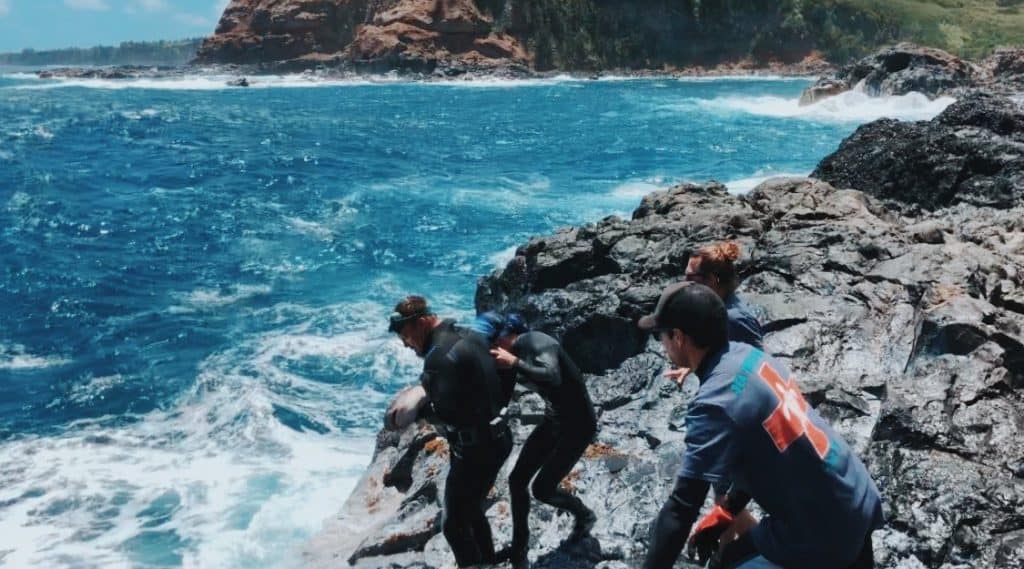 Even though the rescue was a success, it was a sobering experience. “Being there first-hand, really seeing how treacherous it is…it’s nothing to mess around with,” Luecke recalls. “It gave me newfound respect for Mother Nature and the North Shore in general. Super proud of our team and the collaboration between the two of us.”

With both sharks safely returned to the ocean, Luecke reflects on the hard work of both Team Manō and Team Honu during the COVID-19 pandemic. “They’ve done an outstanding job as a skeleton crew.” 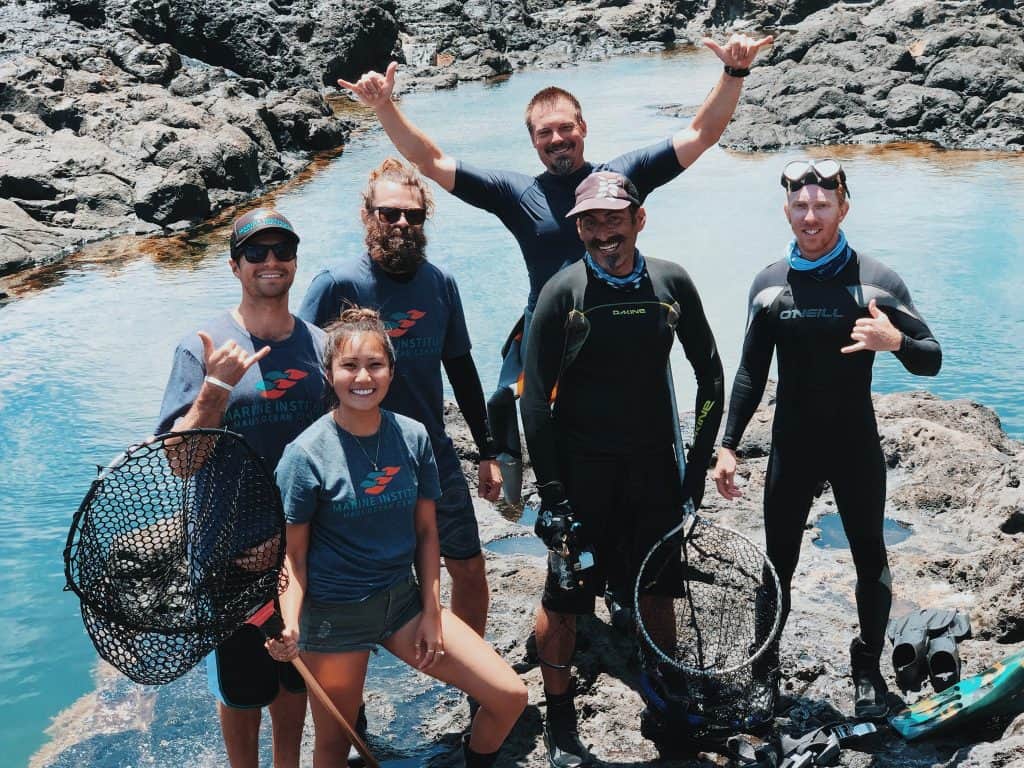 From left to right: Dustin, Aleysa, and Tommy of MOC Marine Institute, and Jim, Josh, and Paul of Maui Ocean Center

While we hope to open to the public again soon, we’re grateful to have such passionate and dedicated individuals hard at work behind the scenes. A big MAHALO to Arik, Nadine, Tessa, Josh, Paul, and Leslie of Team Honu, and Jim, Harry, Matt, Chelsea, Brandon, and Mackenzie of Team Manō for always going above and beyond to care for Hawaiʻi’s marine life!

July 8, 2020 Heather
As the world panicked about not having enough antibacterial soap and sweat pants became the new work attire as stay-at-home orders went into effect- it might seem like a closed aquarium would be tranq...
Read More
Animals
Behind-the-Scenes
News
Happy Birthday, Honu! 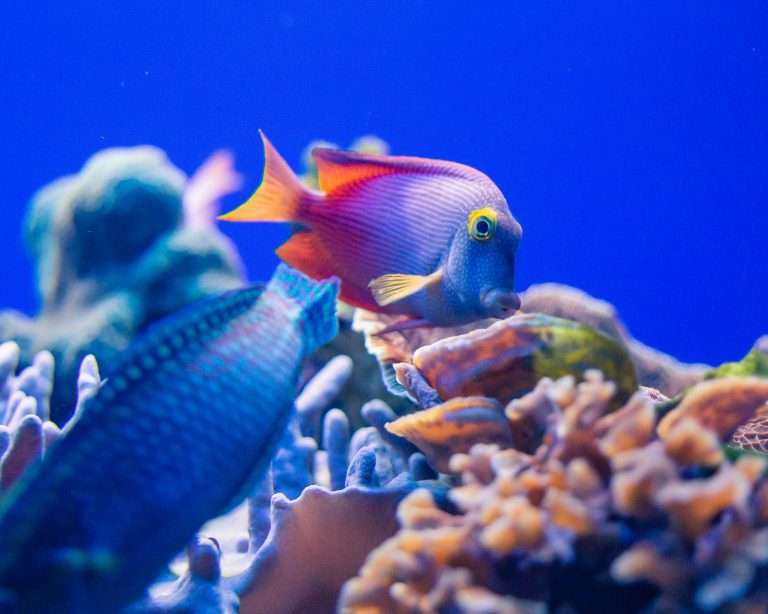 April 15, 2020 Heather
The COVID-19 Coronavirus pandemic is a crisis unlike anything we’ve seen in recent history, and it has unfortunately made its mark on our neighborhoods in Hawai‘i. Our shared commitment to the hea...
Read More