Due to recent updates regarding COVID-19, this event has been canceled. Mahalo for your understanding.

Instead, we invite you to join us for the annual coral spawning event, Incredible Corals: Night at the Reef live on our social media channels. A hui hou! 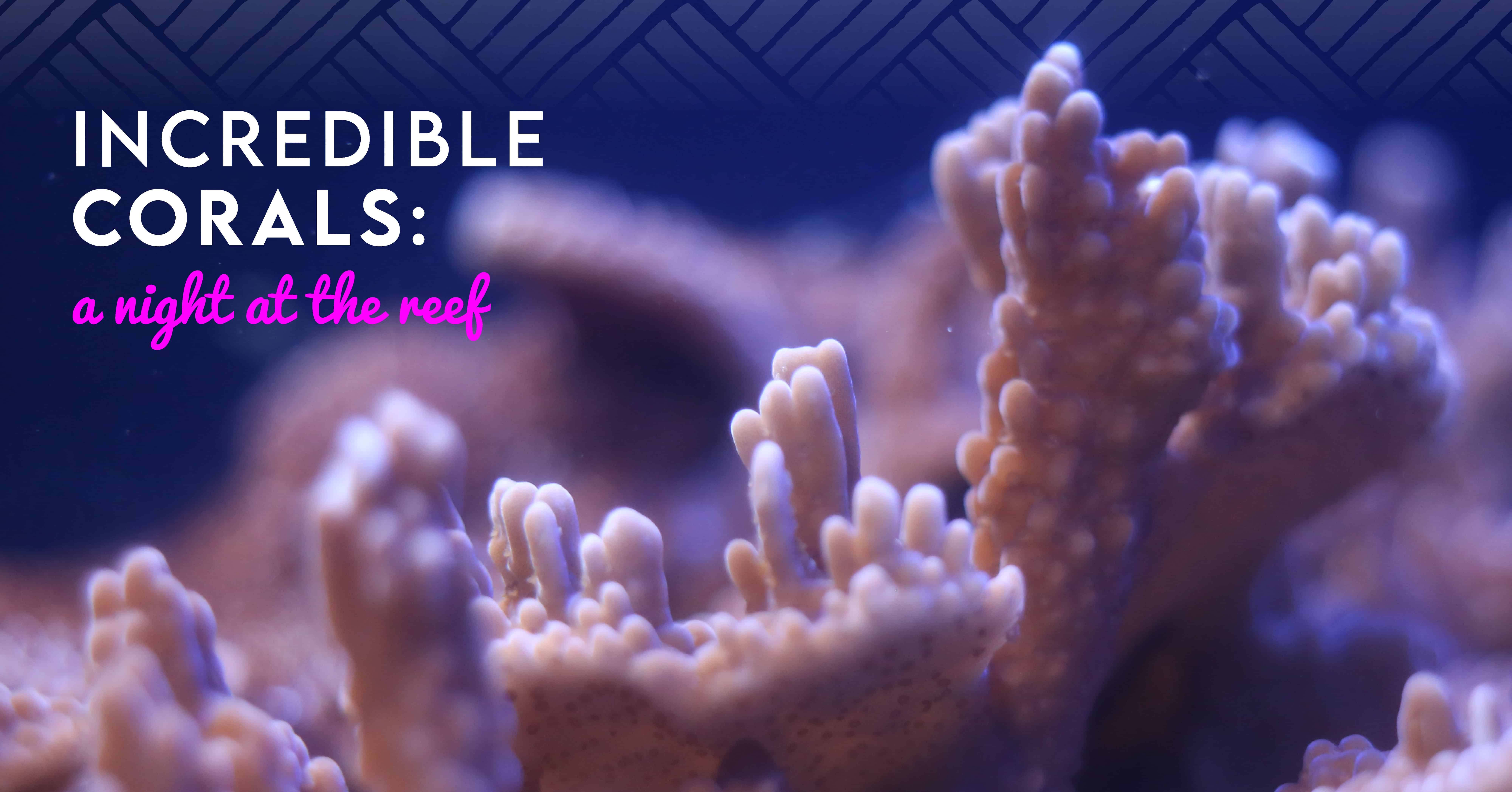 Incredible Corals: Night at the Reef

Join us virtually as one of nature’s spectacular and rarely witnessed events takes place – coral spawning!

Q: What is coral?

A: Corals are tiny living animals that eat, grow, and reproduce. They have a symbiotic relationship with their primary food source: a small photosynthetic algae called zooxanthellae.

Q: What is rice coral?

A: Rice coral (Montipora capitata) is a common coral in Hawaii and may form as either plates or spires, depending on the depth and calmness of the water around it. Rice coral gets its name from the rice-like texture of its surface.

Q: What is coral spawning?

A: Coral is an animal, but because it’s unable to move about to find a mate, reproduction poses a unique challenge. To overcome this barrier, on one night each year, rice coral polyps simultaneously release an ascending barrage of gametes (bundles of egg and sperm) into the water column forming planula, or larvae, in one of nature’s most spectacular and seldom-seen phenomena: coral spawning! The sheer abundance of gametes in the water column gives the effect of a snowstorm and is crucial to the survival of the corals; there is power in numbers and surely someone is bound to survive.

Q: Why is coral spawning significant?

A. While we still don’t fully understand how this amazing feat of synchronization is accomplished, we do know that it’s essential for the survival of these corals, and in effect, the entire coral reef ecosystem. The gametes and planulae provide nutrition for the many fish and invertebrates that feed on them and the formation of new reefs provide shelter for juvenile and adult fishes.

A: Usually between June and August, and shortly after a new moon. This year, we anticipate the rice coral colonies at Maui Ocean Center to spawn on July 21st.

A: Rice corals spawn once a year.

Q: What is the significance of coral in Hawaiian culture?

A: The kumulipo, or Hawaiian creation chant, states that life began with the coral polyp and as more life was born, it became more and more complex. It is believed that ko‘a, or coral, is an akua, or deity, that may be responsible for both life and death for natives to the islands. The historical and cultural significance of ko‘a, or coral, cannot be understated and it is no wonder that corals continue to amaze us to this day.

Q: What challenges do corals face?

A: Unfortunately, corals face continued challenges as ocean temperatures rise. Coral bleaching and ocean acidification threaten the very foundation of the coral reef ecosystem. Coral bleaching occurs when temperatures increase to beyond the safe temperature threshold, which causes the coral polyps to respond by ejecting their primary food source: a small photosynthetic algae called zooxanthellae. This loss of appetite causes the corals to slowly die over the next one to two weeks. In September 2015, ocean water temperatures reached sustained levels that catalyzed unprecedented coral bleaching worldwide. Hawai‘i’s corals were devastated with some areas experiencing up to a 50% mortality rate.

It has also been found that chemical-based sunscreens can have very damaging effects on corals. Ocean acidification is the effect of increased carbon absorption into the ocean. As the acidity increases, corals, and other shell-forming animals, are finding it more difficult to build shells. On Tuesday, July 3, 2018, Hawaii Governor David Ige made history by signing Senate Bill 2571 (now Act 104) into law, becoming the first state in the U.S. to ban the sale and distribution of sunscreens containing oxybenzone and octinoxate chemicals without a prescription issued by a licensed healthcare provider. The historic bill was introduced to the Senate on January 19, 2018 by Hawaii Senator Mike Gabbard and will be in effect on January 1, 2021.

*While the rice corals on exhibit are expected to spawn on July 21st, it is not guaranteed due to numerous environmental variables. The annual Incredible Corals: Night at the Reef event is centered on this predicted date.