Whale, whale, whale… so you think you’re an aficionado of the mightiest Hawaiian marine mammal? Let’s put your knowledge to the test to see if you can separate fact from fluke about the Megaptera novaeangli. If you’re not sure what that is, you’re in for a rough start!

“The opening at the back of a humpback whale’s throat is the size of a grapefruit.” 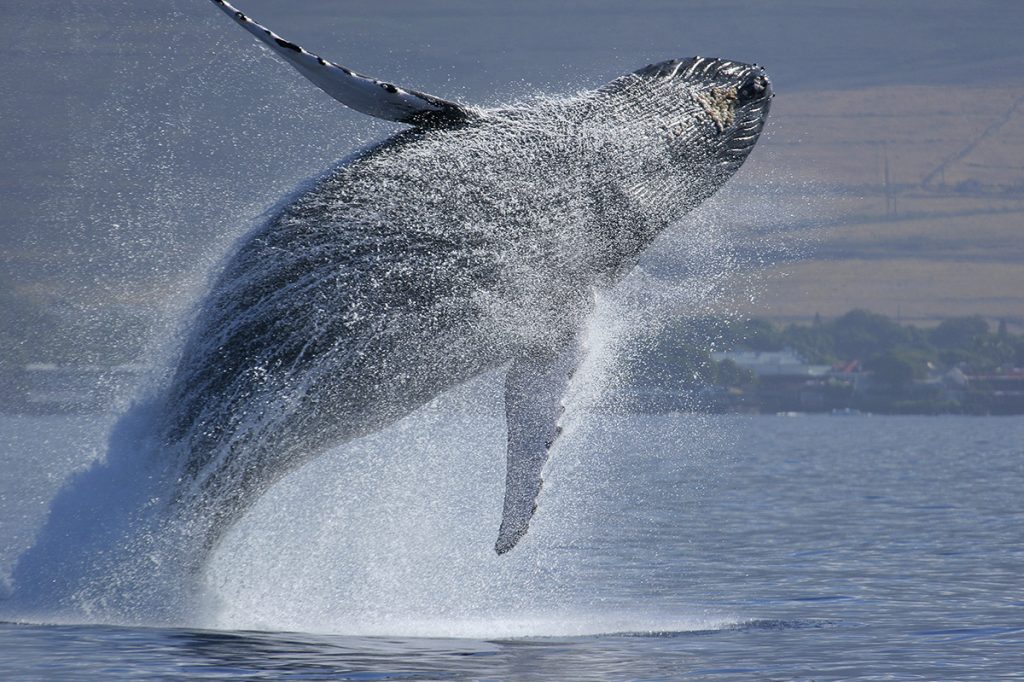 Fact! Mindblown? We are too. Considering a humpback whale grows up to 60ft in length, weighs up to 40 tons, and can hold 5,000 gallons of water in its mouth, the opening at the back of its throat is no larger than a grapefruit. That fact may be difficult to swallow (pun intended), but humpback whales are filter feeders that gobble up millions of tiny prey like crustaceans, krill, herring, and other tasty critters. Humans are off the menu, as a humpback couldn’t swallow us even if it wanted too.

FLUKE! Humpback crooners are strictly males. While many romanticize the idea of a bus-sized humpback serenading its female mate, that’s not how it works. Singing typically takes place during the mating season but it’s between multiple males. Perhaps it’s a warning to back off their lady? Who knows, the purpose of their song is still a great mystery and one that is being heavily researched today. We do know all males within a population sing the same song that changes gradually over time. 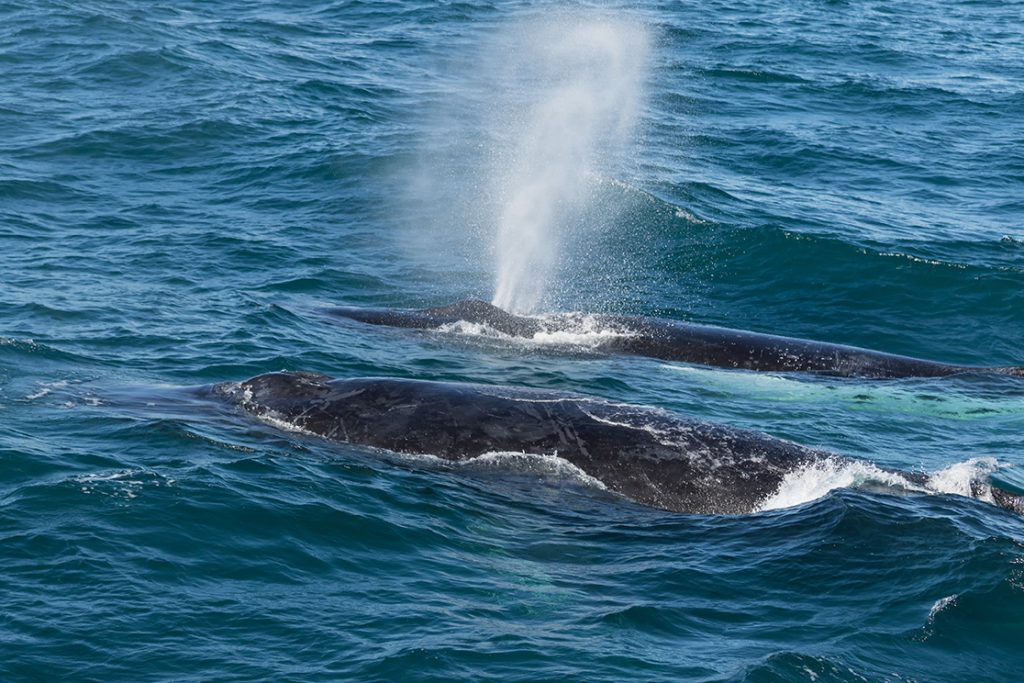 FLUKE! And a double-fluke at that. Toothed-whales and dolphins have a single blowhole, but humpback whales have two. Secondly, their blowholes do not expel water. When humpbacks surface to breathe, muscles around the blowholes contract, pulling in air and mucus, followed by an exhale which projects hot, moist air that condensates with the cooler air temperature. The cloud of condensation is misidentified as water when it’s really just hot, snotty air… gross! I guess the saying should be, “Thar she blows her nose!” 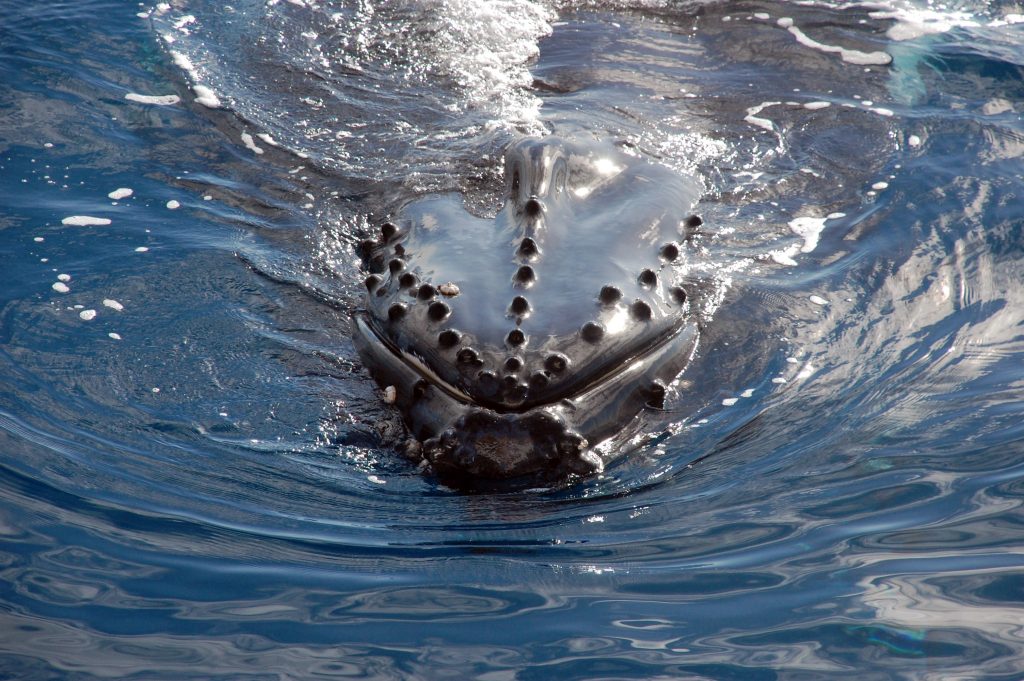 FACT! Mammals are defined as warm-blooded vertebrate animals that possess hair or fur, breathe air with lungs, give birth to live young, and nurse with milk. The humpback meets the criteria. While a humpback isn’t t furry like our pet cat or dog, fist-sized tubercles located along the whale’s jawline and head contain nerve cells and short, stiff hair follicles. “Whale whiskers” is one way to describe them. While it’s hypothesized that the network of tubercles and hair serve a sensory function, their true purpose remains a mystery.

“Humpback whales are endemic to Hawaii and found nowhere else in the world.” 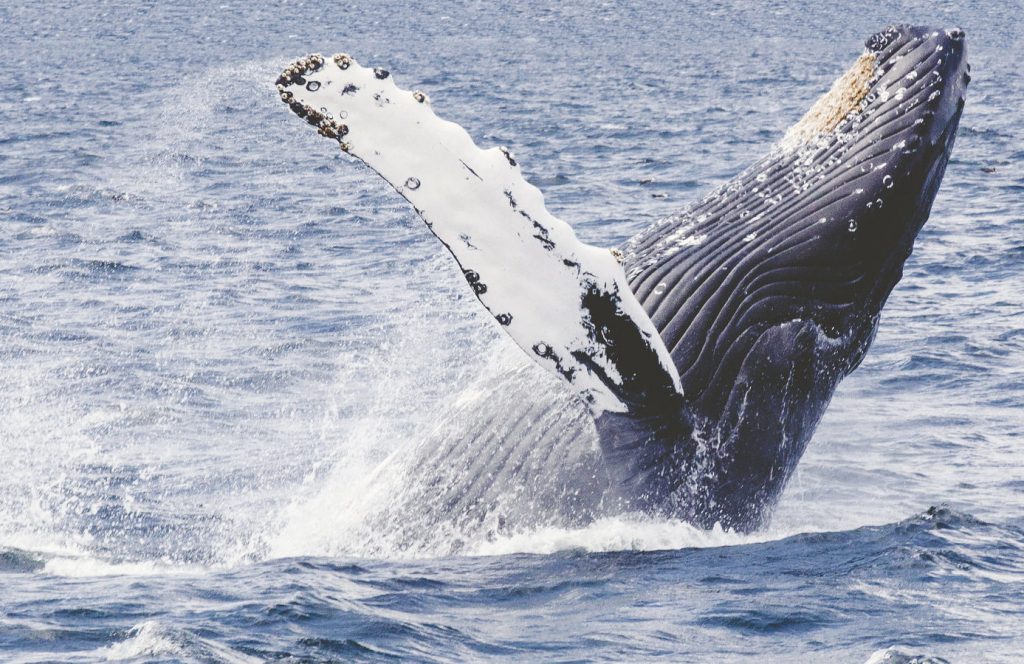 “Lahaina, Maui was once a whaling port.” 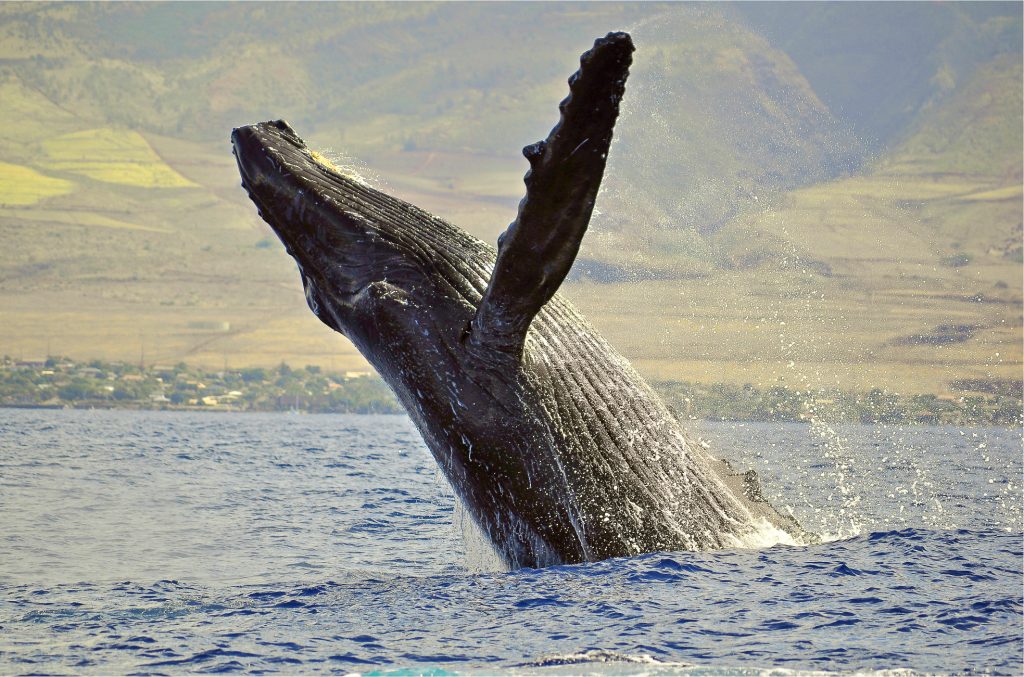 FACT! In the early 1800s, the arrival of whaling vessels from New England marked the beginning of the 40-year whaling era in the Kingdom of Hawaii. The historic town of Lahaina was a bustling fishing and whaling port favored by sailors for its sunny weather, calm seas, and fresh provisions. Remnants of this era can still be seen in museums and historic sites throughout Lahaina.

Did you know? Humpback whales were not hunted in Hawaii. Port cities like Lahaina and Honolulu served as staging sites for sperm whale hunting operations in Japan and the North Pacific regions. The islands’ midpoint location between the US mainland and oversea hunting grounds made Hawaii an ideal destination for resupply, rest and relaxation, drinking, and gambling. Watch our Sea Talk to learn more about the history of humpbacks in Hawaii. 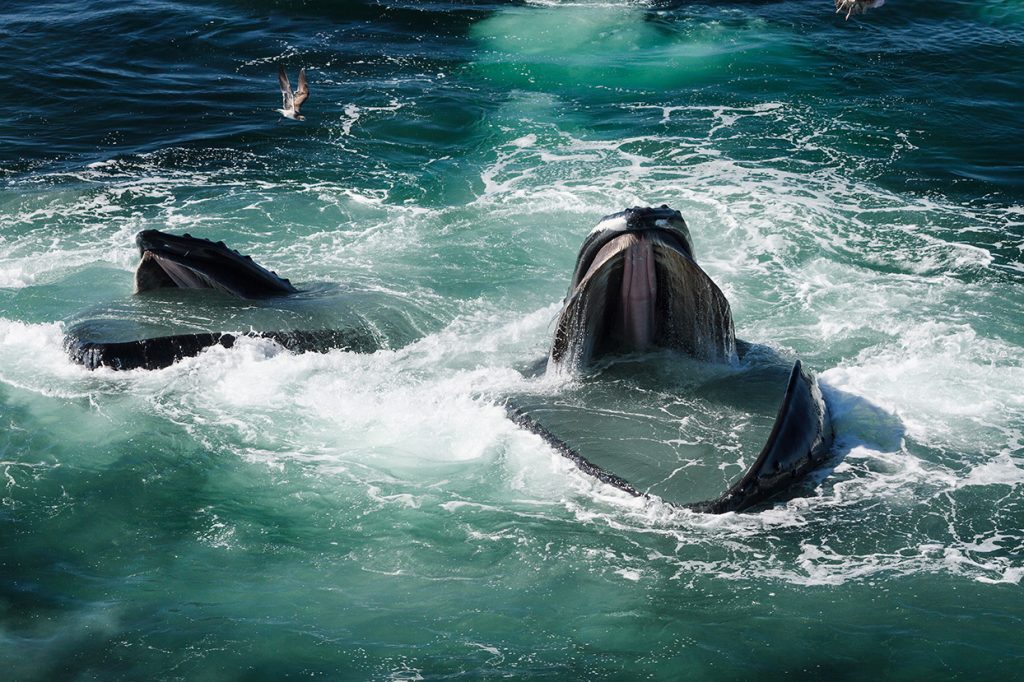 FLUKE! The image above shows humpback whales feeding in Alaska, a behavior not seen in Hawaii. During summer, humpbacks in Alaska eat up to 3,000 pounds of food daily to build up enough blubber content to sustain their winter migration to and from Hawaii. Once in the islands to birth and nurse their young, humpback whales don’t eat until they return to Alaska. You won’t see bubble-net feeding during a Hawaii whale watch tour, but you’ll be treated to breaches, tail slaps, and other high-energy displays – can’t complain! 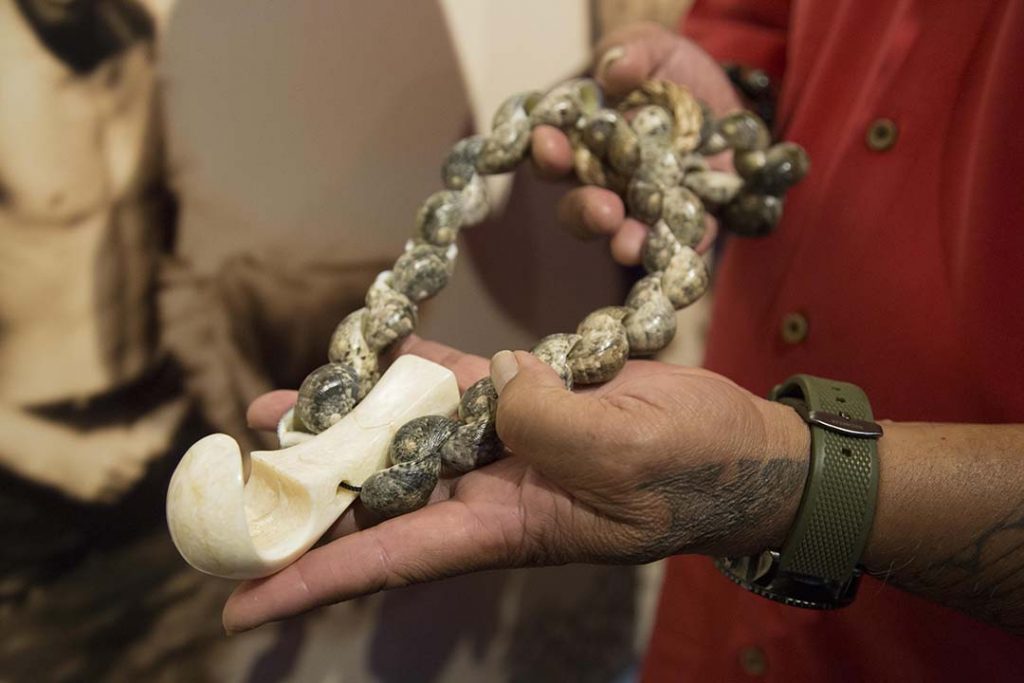 FLUKE! Whale ivory was highly prized by Hawaiian royalty, but it didn’t come from humpback whales. Ivory is sourced from whale teeth, which humpback whales lack in favor of a filter-feeding system of baleen plates and fibers. One theory suggests whale teeth were brought from Polynesia during early voyages or collected on the rare occasion that a toothed whale’s carcass would wash ashore in Hawaii. Whale ivory was often carved into the shape of a tongue and worn as a niho lei palaoa (whale tooth necklace) by Hawaiian ali’i (royal chiefs). This sacred necklace wielded power, strength, and mana, a spiritual energy from their gods and ancestors. Click here to learn more about whales in Hawaiian culture.

How well did you do? Let us know on social media! Share this with your friends and followers, tag @MauiOceanCenter, and use #WhaleOfATime. Learn more about the magnificent yet mysterious humpback whales at Maui Ocean Center’s Humpbacks of Hawaii Exhibit & Sphere or visit NOAA Fisheries website.